The Young and the Restless Spoilers: Elizabeth Hendrickson Returns To Y&R – Chloe Back For Final Adam Confrontation

BY Sean O'Brien on May 18, 2019 | Comments: one comment
Related : Soap Opera, Spoiler, Television, The Young and the Restless 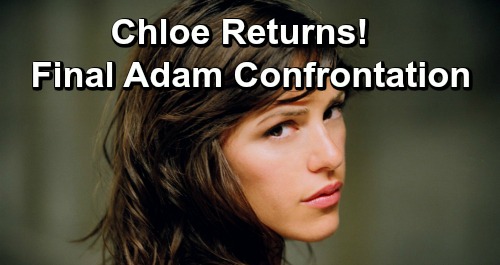 The Young and the Restless spoilers tease that Elizabeth Hendrickson’s (Chloe Mitchell) social media tease, regarding Chloe and Kevin Fisher (Greg Rikaart) projects to an inevitable clash with Adam Newman (Mark Grossman). Hendrickson’s over-the-top hint was followed up by comments from a Y&R insider to SOD confirm Chloe’s return.

As devoted fans recall, Chloe framed Adam (as then played by Justin Hartley) for the poisonous (non)murder of Constance Bingham (Sally Kellerman). He was wrongly convicted, as Miss Mitchell hoped, and sentenced to a long prison stay. But Victor Newman (Eric Braeden) used his influence to have that sentence erased. It was at that point that Chloe’s thirst for vengeance raged.

Hendrickson’s dynamic character then plotted what has since appeared as the ultimate revenge achieved. She tracked Adam to a cabin in the woods after Victor aided his escape from prison transport. In that storyline, Adam was rightly convicted of beating a prison guard and was sentenced to many years behind bars.

Y&R’s write-out of Hartley, who voluntarily left the cast to join what became a hit nighttime drama, This Is Us, was very creative. Adam, chained to a bed post by Chloe was shot was sedative dart. He appeared to fall unconscious, Chloe offered some parting verbal shots, then left the room, ruptured the gas line, and kaboom!

Bits of Adam were later recovered by Paul Williams’ (Doug Davidson) Crime Scene Investigation team, which was a wink to Y&R’s broadcast network’s numerous CSI shows. Of course fans knew that no body meant Adam could easily be alive and return someday, which has happened in the spring of 2019.

Rikaart and Melissa Claire Egan (Chelsea Newman) have already been confirmed as returning to the cast. But Hendrickson is currently playing Margaux Dawson on General Hospital. With no news about her exiting that steamer, the tease she offered about Chloe’s eventual return might be theoretical, or maybe not?

Y&R has just begun what surely will be Adam’s long comeback arc. Kevin can initially be used as the link to Chloe because Hendrickson’s character is also assumed to be deceased. Khloe furthered that ruse, with Victor’s knowledge, in order to allow Bella Mitchell (Cali May Kinder) to keep her mother.

Of course, Chloe won’t be guilty of murder now that Adam has been confirmed among the living. Actually, Adam’s forgiveness of Chloe, following his father’s rare compassionate take, could even allow a wipe-away of her involvement in the cabin blast. But that conflict and resolution would come far further down this developing storyline.