BY Heather Hughes on May 7, 2019 | Comments: 5 comments
Related : Soap Opera, Spoiler, Television, The Young and the Restless 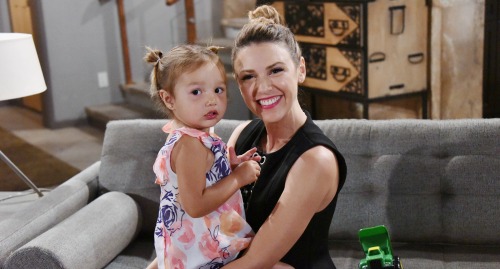 The Young and the Restless (Y&R) spoilers tease that another big return could be looming. Y&R already revealed that Greg Rikaart is headed back to the CBS soap as Kevin Fisher. Could Chloe Mitchell (Elizabeth Hendrickson) be returning along with him? A new Instagram post dropped a strong hint about it.

Hendrickson posted a pic of herself at the recent Daytime Emmys celebration. She was posing with Rikaart, who was giving her a kiss on the cheek. Hendrickson said, “There’s a lot of love in this picture. And a lot more to come!” She added an emoji of some peeking eyeballs, so this may have been her way of giving a little clue. It certainly sounds like Hendrickson could be making a Y&R comeback.

After all, the timing is perfect since Kevin is returning and Adam Newman’s (Mark Grossman) survival has been confirmed. Chelsea Newman (Melissa Claire Egan) is coming home to Genoa City as well, so they should really throw Chloe in the mix. This storyline wouldn’t be complete without her!

Genoa City is in for a shock when they realize Adam is still alive. It’d be great to make this a double bombshell and have Chloe’s survival exposed, too. Then again, it’s possible Chloe will only be seen in scenes with Kevin. They’ve been off living a secret life in Oregon, so we could see Kevin interacting with a nervous Chloe after Adam’s return.

Another option would be if Y&R reshot some flashbacks with Grossman in place of Justin Hartley. That often happens on soaps when a recast comes on and an important plot point is covered. It’s nice to remind fans, but they need the latest actor to do it. That means bringing back the other actors involved, so we need Hendrickson in this case.

The Young and the Restless spoilers say Adam will get his memories back eventually. Perhaps he’ll recall what happened with Chloe as part of the memory flood. We may also see exactly how Adam survived and where he first went after the explosion. Chloe’s appearance could even serve as trigger for Adam’s memory recall – seeing the person who almost killed you just might do that!

Regardless, Hendrickson’s hint suggests a return to Y&R and many fans would be excited about that. She also plays Margaux Dawson on General Hospital, but GH viewers shouldn’t worry about a departure just yet. It looks like Hendrickson may continue in that role, especially if her Young and the Restless stint turns out to be short-term.

Still, this potential Y&R comeback news is worth getting excited about! We’ll give you updates as other details emerge. Stay tuned to the CBS soap and don’t forget to check CDL often for the latest Young and the Restless spoilers, updates, and news.

There’s a lot of love in this picture. And a lot more to come! 👀 . . . #daytimeemmys #actress #chloemitchell