BY Heather Hughes on May 17, 2019 | Comments: one comment
Related : Soap Opera, Spoiler, Television, The Young and the Restless 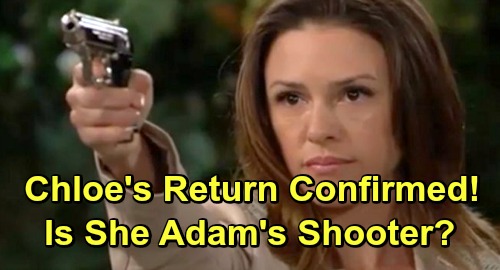 The Young and the Restless (Y&R) spoilers tease that a huge comeback is on the way. Earlier this month, Elizabeth Hendrickson’s (Chloe Mitchell) cryptic Instagram hint led to some speculation. It seemed like a return was in the works, but no one could be sure.

Fortunately, Hendrickson’s comeback is now a done deal. A Y&R spokesperson wouldn’t offer any details to Soap Opera Digest, but he or she suggested something big was brewing. The spokesperson teased, “Chloe is known for her epic surprise visits, so viewers stay tuned.”

When The Young and the Restless’ Twitter account posted a pic of Thad Luckinbill (J.T. Hellstrom) on set, they also advised fans to “stay tuned.” That means it’s happening, so keep watching to see it. Since we know Chloe is going to pop up at some point, we have to wonder about that shocking shooting on Friday. Could Chloe be the one to pull the trigger?

It’d be crazy for Chloe to show up and blow the agreement she made with Victor Newman (Eric Braeden). Chloe’s secretly been living with Kevin Fisher (Greg Rikaart) and their daughter, Bella Fisher (Cali May Kinder), out in Oregon. She’d be risking everything to pump a bullet in Adam Newman (Mark Grossman), but it’s possible. After all, Chloe has had her fair share of unhinged moments. She’s certainly capable of this.

If Chloe has gone off her rocker again and somehow knows Adam is alive, she might’ve returned for revenge. However, Victor managed to conceal Adam’s survival from his family. He hid the secret until Victoria Newman (Amelia Heinle) realized something was up and set all this in motion. It’s tough to believe Chloe found out when even the Newmans were in the dark.

With that in mind, maybe Chloe’s surprise visit will happen down the road. Regardless, you can bet Chloe will want to face Adam eventually. The Young and the Restless spoilers say some exciting twists and turns are ahead, so don’t miss all the action.

Are you glad Chloe’s making a comeback? Will she target Adam once more? We’ll give you updates as other Y&R news comes in. Stick with the CBS soap and don’t forget to check CDL often for the latest Young and the Restless spoilers, updates and news.