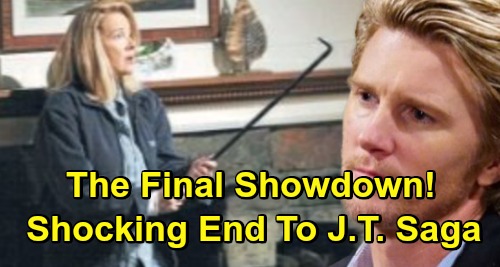 The Young and the Restless (Y&R) spoilers tease that Nikki Newman (Melody Thomas Scott), Victoria Newman (Amelia Heinle) and Sharon Newman (Sharon Case) will face a new predicament. After Nick Newman (Joshua Morrow) and Billy Abbott (Jason Thompson) help them escape, the women will find themselves at the Abbott cabin. It’ll serve as their hideout while the guys take care of business.

Billy and Nick will discover that J.T. Hellstrom (Thad Luckinbill) was indeed behind the surveillance at the ranch. J.T. has been spying on Victoria at her place as well. That’s undoubtedly how J.T. was able to stay one step ahead of the cover-up crew. The pieces will fall into place for Billy and Nick, so they’ll set a dangerous trap and hope it pays off.

The Young and the Restless spoilers say Nick and Billy will try to beat J.T. at his own game. They’ll use Victoria’s bugged home to set a trap for this monster. The schemers will expect J.T. to show up at the Dark Horse warehouse, but J.T. will be smarter than they thought. He’ll realize what they’re up to and opt to skip the confrontation. Victor Newman (Eric Braeden) may help the guys figure that out.

Meanwhile, J.T. will want to have a final showdown with the girls’ night gang. He may plan to be the last one left standing this time! Y&R fans will see total terror for Sharon, Victoria and Nikki. J.T. will be as belligerent as ever, so an eerily similar scene will play out. The Young and the Restless spoilers say Nikki will once again grab a fireplace poker to defend Victoria, Sharon as well as herself.

It looks like Nikki will bash J.T. in the head once more, but they’ll handle it correctly this time. There’ll be no Phyllis Summers (Gina Tognoni) around to lead them astray. The women will call 911 and let the cops come see the aftermath for themselves. This will certainly back up the story that came out in court!

The Young and the Restless spoilers say J.T.’s head will prove resilient, so he’ll survive this round with the fireplace poker, too. J.T.’s arrest is coming up, so the cover-up crew’s freedom is in sight. We’ll give you updates as other Y&R news emerges. Stick with the CBS soap and don’t forget to check CDL often for the latest Young and the Restless spoilers, updates, and news.