BY Heather Hughes on April 11, 2019 | Comments: one comment
Related : Soap Opera, Spoiler, Television, The Young and the Restless 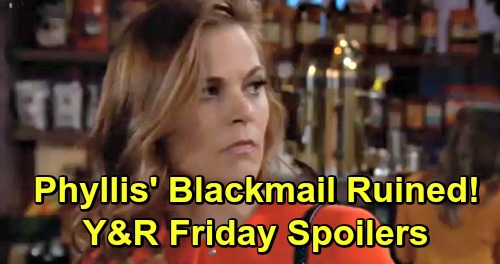 The Young and the Restless (Y&R) spoilers for Friday, April 12, tease that Phyllis Summers’ (Gina Tognoni) scheme will flop. She was hoping to score proof of Lola Rosales (Sasha Calle) and Kyle Abbott (Michael Mealor) cheating before using it as blackmail material. Of course, there are some big issues with that plan.

On Thursday’s Y&R episode, April 11, Kyle doesn’t actually do the deed with Lola. He bails on their sex session at the last second and decides to come clean to Summer Abbott (Hunter King). Phyllis obviously can’t use any of this against Kyle if he confesses, so she may be at a disadvantage once again.

The Young and the Restless spoilers say a guilty Kyle will kick off this tough conversation on Friday. It’s possible he’ll tell Summer everything as planned and insist he wants out of the marriage. Kyle might point out that it’s not fair to any of them.

He may contend that he’s pining for Lola, Lola’s pining for him and Summer’s chasing an impossible dream. Nobody’s going to be happy if they let this go on.

However, a lot can happen in just a few moments. Summer could suddenly have liver transplant complications that send her to the hospital. She could even just give Kyle a certain look and make him question things.

There’s a chance Kyle will find a reason to shift gears and steer this chat in another direction. He might confess to the almost hookup and still stand by his wife depending on how it goes.

No matter how this plays out, Phyllis will need a new tactic. We have faith that Phyllis will find one. She’s a resourceful gal who never gives up, so there’ll surely be some way for her to gain the upper hand.

Meanwhile, Lauren Baldwin (Tracey E. Bregman) will work hard to protect her company. She’ll hope to get Jabot’s stake in Fenmore’s back with or without Phyllis’ help.

The Young and the Restless spoilers hint that Lauren may have to get sneaky. Could there be some legal loophole thanks to Jack’s purchase of My Beauty Collective? Regardless, Jack will blow his top in the week ahead. It seems likely that’ll be due to whatever Lauren pulls next.

Y&R fans won’t want to miss what’s coming up in Genoa City. We’ll give you updates as other news emerges. Stay tuned to the CBS soap and don’t forget to check CDL often for the latest Young and the Restless spoilers, updates, and news.