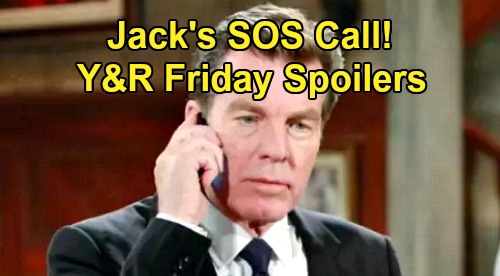 The Young and the Restless (Y&R) spoilers for Friday, August 2, tease that Jack Abbott (Peter Bergman) will get an SOS call. He’ll be summoned to help someone, but who will it be? It’s possible Kyle Abbott (Michael Mealor) will face more pre-wedding drama thanks to Theo Vanderway (Tyler Johnson), but Kyle would probably rather leave his dad out of that for now. Perhaps we should look at other options.

Jack also recently decided to merge Jabot with Ashley Abbott’s (Eileen Davidson) My Beauty. There are bound to be some hiccups with the transition, so Jack might have some crisis to solve that relates to that. However, the most likely option may be another round of Billy Abbott (Jason Thompson) drama. Jack recently urged his brother to get some help, but he may have to push harder on Friday.

Y&R spoilers say Billy will soon have another vivid nightmare about Delia Abbott (Sophie Pollono). He’s always too late to save Delia in his dreams, but he won’t be too late to seek revenge in this one. After Billy commits murder in his next nightmare, it’ll be time to address this problem once and for all. Billy can’t let this go on or else he might really kill Adam Newman (Mark Grossman).

As a result, Billy will take steps to deal with his issues. The Young and the Restless spoilers hint that Billy will leave Genoa City within the next few episodes – presumably to seek treatment somewhere. Of course, this may just be a brief stay like when Billy went to quickie rehab for gambling addicts.

There’s been no word about Jason Thompson leaving the show, and that’s likely the kind of news that would break long before Billy’s departure. As for Phyllis Summers (Michelle Stafford), she’ll continue her attempt to make peace with her enemies. It’s a long list, so Phyllis has more work to do!