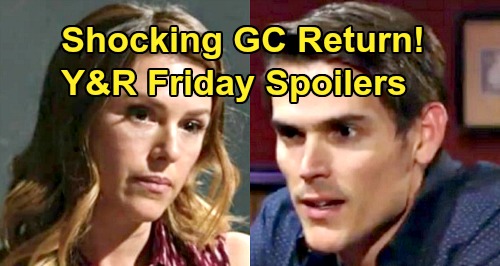 The Young and the Restless (Y&R) spoilers for Friday, August 23, tease that Victor Newman (Eric Braeden) will have a tense conversation with Michael Baldwin (Christian LeBlanc). He’ll want to get a few things straight since Michael’s been helping out Adam Newman (Mark Grossman). Victor won’t know what kind of game Michael’s playing, but he’ll definitely have some concerns.

Y&R fans know Michael is plotting Adam’s takedown, but he has to be careful here. He can’t afford any slipups since he’s got one shot to get this done. Michael needs to be cautious about how much he reveals and when. However, Michael may drop a hint to Victor on Friday. It couldn’t hurt to let Victor know a storm’s brewing!

Victor will insist Adam’s out to destroy his family and warn that Michael had better not land on the wrong side. He’ll make it clear that Michael will pay the price if he helps Adam hurt the Newman clan. Michael may assure Victor that all will make sense in time. He’s focusing on a grander strategy than anyone realizes, so Victor will hope Michael knows what he’s doing.

Other Young and the Restless spoilers say Rey Rosales (Jordi Vilasuso) will find resolution. There are plenty of issues within his family, but he’ll get some closure on Friday. Perhaps there’ll be another discussion between Rey and Adrian Rosales (Jay Montalvo). Rey will never forgive and forget, but maybe he can make peace with the past and let go of some rage – if only for his own sake.

Meanwhile, someone familiar will make a Genoa City comeback. There’s no confirmation on this person’s identity just yet, but Chloe Mitchell (Elizabeth Hendrickson) is set to hit town soon. Billy Abbott (Jason Thompson) is spiraling out of control, so Chloe will likely play a role in his storyline. Regardless, Billy will ultimately be on a vengeful mission that can’t be stopped.