BY Heather Hughes on August 29, 2019 | Comments: one comment
Related : Soap Opera, Spoiler, Television, The Young and the Restless 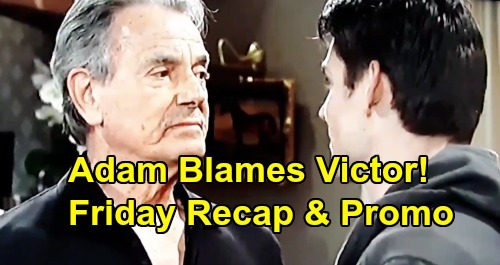 The Young and the Restless (Y&R) spoilers for Friday, August 30, tease that Kevin Fisher (Greg Rikaart) and Chloe Mitchell (Elizabeth Hendrickson) will hold Billy Abbott (Jason Thompson) hostage for his own good. Billy crashed his car trying to run down Adam Newman (Mark Grossman), so they’ll take him to a cabin instead of the hospital. After Billy wakes up and turns violent, Kevin will tranquilize him.

Billy’s leg will be in a splint rigged by Chloe, and she’ll think she can help with his mental problems, too. Kevin and Chloe will decide to pretend they’ve got nothing to hide while they figure out their next move. Y&R spoilers say Kevin will have a plan in mind that’ll alert everyone to Chloe’s survival.

At Adam’s place, he’ll get a visit from Phyllis Summers (Michelle Stafford). She’ll be told about the on the attempt on Adam’s life, but he won’t know who tried to mow him down or who shoved him aside. Phyllis will promise she’s innocent before pointing the finger at Billy, but Adam will insist he’s ruled out both Billy and Kevin. That’ll lead Phyllis to the conclusion that it was Victor Newman (Eric Braeden), but Adam will have his doubts.

However, Phyllis will manage to get inside Adam’s head with her accusations. She’ll think Victor is more than capable of this. Meanwhile, Victor will give Summer Newman (Hunter King) a warning. He’ll point out that Adam’s playing a dangerous game. Victor will definitely worry about what Adam might pull next.

Afterward, Adam will show up to rip into Victor over the incident on route 7. The Young and the Restless spoilers say Victor will be completely clueless. Adam will think Victor used his mother’s memory against him by luring him with that handkerchief, but Victor will deny it. He’ll argue that Adam’s mother was a good person and would be ashamed of the man her son is now.

Adam will make it clear that he hates his father before turning over a nearby chess set. Once Victor’s alone, he’ll make an important phone call. Victor will want his minion to find out information on who tried to run down Adam.

At the Grand Phoenix, Abby Newman (Melissa Ordway) will show off the new lounge to Chelsea Newman (Melissa Claire Egan). They’ll gush about it before Phyllis appears to complain. She’ll rant about them keeping the hotel name she wanted and hurl insults. After Theo Vanderway (Tyler Johnson) and Zoe Hardisty (Anna Grace Barlow) walk in, Phyllis will tell Theo they got the boot.

The Young and the Restless spoilers say Abby will correct Phyllis on that. She’ll insist Theo wasn’t fired; it’s Phyllis they muscled out. Once Summer arrives, Phyllis will realize her daughter will be on hand to promote the event. She’ll fume before storming out, but Theo will assure Summer that her mom’s just frustrated. He won’t think it’s really directed at Summer.

After Zoe exits, Theo will wonder if Summer would like to be his plus one for the opening. She’ll mention Zoe and suggest Theo’s keeping her around with plans for drama. Summer will point out that Kyle Abbott (Michael Mealor) and Lola Abbott (Sasha Calle) are going to be at the party.

At Crimson Lights, Chelsea will be shocked to see Chloe alive and well. She’ll launch a tirade and insist she’s calling the cops, but Chloe will admit she’s already been arrested and freed. Chelsea won’t be happy about Chloe dodging real consequences. She’ll talk about all the pain Chloe caused and how broken Adam is now. Chelsea will hold Chloe responsible and refuse to repair their friendship.

At Society, Phyllis will join Adam at the bar to commiserate on their rotten circumstances. She’ll insist it’s payback time, and Adam will agree. He’ll want to deliver some personal and long-lasting blows. The Young and the Restless spoilers say Adam will bring Victor’s blood disease. He’ll feel like his dad’s cheating death once again, but he’ll hope to prove Victor isn’t invincible.

It sounds like some exciting scenes are coming up. We’ll give you updates as other Y&R news emerges. Stay tuned to the CBS soap and don’t forget to check CDL often for the latest Young and the Restless spoilers, updates and news.