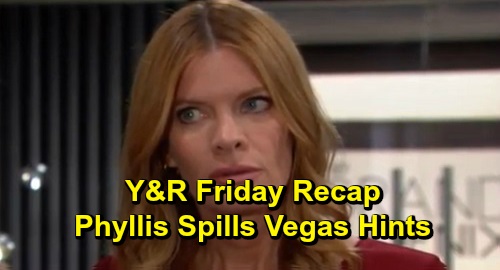 The Young and the Restless (Y&R) spoilers recap for Friday, December 13, teases that Phyllis Summers (Michelle Stafford) will manage to lift Nick Newman’s (Joshua Morrow) spirits. She’ll get him smiling after she bangs on Crimson Lights’ jukebox and insists the place could use some updated equipment. Once Phyllis joins Nick at a table, they’ll discuss her firing as well as Chelsea Lawson’s (Melissa Claire Egan) less than desirable living situation.

Phyllis will feel confident that if Nick had broken up with Chelsea and stuck with his run for city councilman, he would’ve won. Before Nick exits, he’ll admit Phyllis’ jukebox antics got him out of his funk. Later, Phyllis will track “Chance” Chancellor (Donny Boaz) down at the Grand Phoenix. She’ll spar with Chance as she rants about her plan to prove her innocence.

Chance will want Phyllis to take this somewhere else, so she’ll needle him by asking if she should take it to Vegas. When Chance continues to believe Phyllis is bluffing, she’ll mention a duffel bag and a gun. Chance will counter that he sometimes he carries a gun when he’s undercover, but she’ll bring up another sleazy guy who was involved.

Phyllis and Chance will keep bickering, but she’ll ultimately point out that he’s not getting rid of her. She’ll intend on getting to the bottom of exactly what went down in Vegas. Y&R spoilers say Chance will insist this conversation is over, but he’ll want Phyllis to ruminate on her empty life and her need to dig up dirt.

At Adam Newman’s (Mark Grossman) penthouse, he’ll get into a heated argument with Chelsea. Adam will want to carefully call Connor Newman (Judah Mackey) out on his lies about Sharon Newman (Sharon Case), but Chelsea will think they need to address their own lies. She won’t want to fuel Connor’s fantasy of them getting back together. Chelsea will want Connor to accept that they’re not a couple.

Adam will suspect Nick tried to convince Chelsea that moving in was a bad idea. He’ll be upset over Chelsea trying to rip away Connor’s safe space and planning to upend his world. After their voices get raised, Connor will come downstairs and plead for his mom to stay. He’ll blame Sharon for not wanting them all together, but Adam will insist that’s not the case.

As Connor’s meltdown continues, he’ll want Chelsea to promise that she’s coming home. Afterward, Chelsea will head back to Nick’s place for more clothes. She’ll get that this must be hard on him, but he’ll not that it’s been hard on Christian Newman (Alex Wilson), too. Nick will insist Christian’s been asking if Chelsea and Connor are coming back.

Although Nick will understand why Chelsea has to put Connor first, he won’t know if he can keep doing this. Nick will ask if Chelsea thinks she can, so that’ll give them both something to ponder. At Adam’s place again, he’ll reassure Connor that Chelsea will return. After a call comes in from Victor Newman (Eric Braeden), Adam will decide not to take it.

At Victoria Newman (Amelia Heinle) and Billy Abbott’s (Jason Thompson) place, she’ll find him working on a dollhouse for Katie Abbott (Sienna Mercuri). They’ll take a moment to talk about how they keep missing each other, but Billy will deny that he’s avoiding Victoria. After Victoria steps away, Billy will wonder to himself why he keeps hiding things and holding back.

Victoria will eventually hope she can get Billy to open up, but he’ll just end up telling Victoria he needs her. They’ll make love before Victoria has to dash off to work again. Once Billy’s alone, he’ll pace a bit and decide to go work off some nervous energy. That’ll take Billy to the dive bar, where he’ll once again chat with Amanda Sinclair (Mishael Morgan).

Billy will feel like everything in his life’s perfect except him. Amanda will get where Billy’s coming from and talk about leaving her baggage behind her. She’ll admit she’s not someone who finds it easy to trust people. At Newman Enterprises, Victoria will send Billy a text to let him know she loves him.

Back at the Grand Phoenix, Abby will meet up with Chance for a drink. He was tempted by her head of security offer. Chance won’t accept it, but he’ll confess he’s decided to stay in town and figure out what he’s going to do. The Young and the Restless spoilers say Abby will think that calls for a toast to the future. Chance will respond by asking Abby out on a date, so this romance is moving right along.