BY hellodrdavis on December 13, 2019 | Comments: 2 comments
Related : Soap Opera, Spoiler, Television, The Young and the Restless 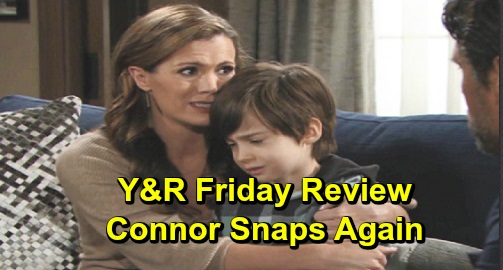 The Young and the Restless spoilers review for Friday, December 13, tease that Chelsea Lawson (Melissa Claire Egan) will arrive at Adam Newman’s (Mark Grossman) penthouse, and she’ll be tense and worked up. They’ll quickly start arguing about the situation with Connor Newman (Judah Mackey), as Chelsea disagrees with Adam about calling Connor on his lies about Sharon Newman (Sharon Case).

Chelsea will say that they’ve been lying to Connor with their living arrangement, and she’ll want to prepare Connor for the reality that they won’t all be living together forever. That will set Adam off, and he’ll realize that Nick Newman (Joshua Morrow) is behind Chelsea’s new attitude. They’ll bicker and voices will raise, and Chelsea will be ready to storm out when Connor comes downstairs and begs her not to go.

Adam and Chelsea will sit down with Connor who will whine that they were arguing before declaring that this is Sharon’s fault. Connor will say that it’s the monster’s plan for one of them to leave, and that things are ok only when they’re all together. Chelsea will try to comfort Connor, but he’ll say that they think something’s wrong with him, but that it’s really the monster as he cries in Adam’s arms. Connor will make Chelsea promise that she’s coming home.

Chelsea will head to Nick’s place to pick up a few things, and she’ll tell him that Connor had another meltdown. They’ll discuss how she has to put Connor first, and Nick will relay how hard it is on Christian Newman (Alex Wilson) with Chelsea and Connor away. Nick will say that he understands, but he’ll say he doesn’t know how long they can keep doing this.

Back at Adam’s place, Connor will wake up, still on the couch with Adam. He’ll be visibly upset, and Adam will assure him that he’s there, and that Chelsea is coming back, and that they’ll always be there for him. While doing so, Adam will ignore an incoming call from Victor Newman (Eric Braeden).

Next, on the new episode of Y&R on Friday, December 13, Billy Abbott (Jason Thompson) will once again battle the little voice in his head. While at home, he’ll work on a dollhouse and tell himself that it’s got to be perfect – the perfect little house for the perfect little family. He’ll tell the male doll, “look at you all confident – bet you never had a gambling problem, or lost the company boat in a poker game, or broke your wife’s heart.”

Victoria Newman (Amelia Heinle) will then come in want to talk. She’ll wonder if Billy has been avoiding her lately since they haven’t had much time to themselves. Billy will assure her that he’s fine and that when he gets through whatever this is, she’ll be by his side. His inner voice will wonder why he keeps holding back, and instead of talking with Victoria, he’ll say that he needs her and the two will make love.

Billy will then go to the little bar outside Genoa City, where he’ll encounter Amanda Sinclair (Mishael Morgan). They’ll sit and talk, and Billy will say that everything in his life is perfect except for him. Amanda will say that she knows a little about that – she’s left all her baggage behind and is starting over with a squeaky-clean slate. Billy will want to get to know Amanda, but she’ll say that she’s someone who finds it hard to trust people.

Finally, Chance Chancellor (Donny Boaz) will be minding his business at the Grand Phoenix when Phyllis Summers (Michelle Stafford) shows up and blasts him about her firing. They’ll bicker, and finally Chance will tell her to take it somewhere else. She’ll wonder if she should take it to Vegas, and Chance will be exasperated…until Phyllis mentions a duffle bag and a gun. Chance will try to cover by saying he was working undercover.

But Phyllis will say that he wasn’t carrying the items – the little sleazy guy with the bad suit was. Chance won’t give up any details, and he’ll give Phyllis a big speech ending with the suggestion that she go get a job, but Phyllis won’t be deterred. She’ll say that something big went down and that he and Adam were right in the middle of it, and she’ll find out what it was.

Phyllis will ultimately leave, and Abby Newman (Melissa Ordway) will speak with Chance. He’ll turn down her job offer to be head of security at the hotel, but he’ll impart the good news that he’s decided to stay in Genoa City. They’ll then toast to the future, and he’ll ask her out on a date.