BY Heather Hughes on January 3, 2019 | Comments: one comment
Related : Soap Opera, Spoiler, Television, The Young and the Restless 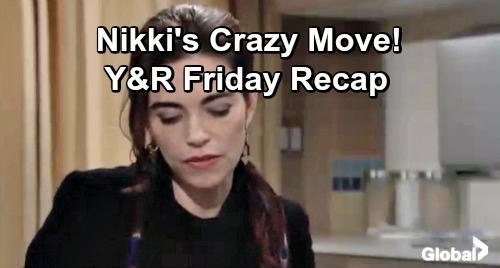 The Young and the Restless (Y&R) spoilers update and recap for Friday, January 4, tease that Jack Abbott (Peter Bergman) and Kerry Johnson (Alice Hunter) will return from their vacation in Bora Bora. In a moment alone with his brother, Billy Abbott (Jason Thompson) will comment on Jack’s fast-track romance. Jack will admit that things are going well and he’s happy about it.

Billy will bring Jack up to speed on his own romantic developments. He’ll come clean about that kiss with Victoria Newman (Amelia Heinle) and the possibility that they’ll reconnect. Jack will suggest that a meaningful gesture would be a good idea.

At the hospital, Victoria will talk Nikki Newman (Melody Thomas Scott) out of confessing. She’ll be convinced that Victor Newman (Eric Braeden) can wiggle out of this, but Nikki wouldn’t be able to. Victoria will worry that Nikki couldn’t properly recover in prison, so her mom will agree to hold off.

Later, Victoria will open up to her therapist. She’ll admit she feels guilty for bringing J.T. Hellstrom (Thad Luckinbill) back into her life and setting all this drama in motion. Victoria will also come clean about kissing two men in one day. She’ll wonder if she can trust her instincts when it comes to Billy, so her therapist will think they need to have an honest chat before they decide anything.

Victoria will catch up with Billy eventually and put it all out there. She’ll note that old feelings are back, but she’ll also worry about breaking up again. Victoria will point out that it could be rough on the kids. Billy will talk about how he felt about Victoria before he proposed. He’ll make it clear that he’s not ready to pop the question again, but he remembers all the reasons he fell in love with her.

Before Billy can steal a kiss, Victoria will stop him. She’ll insist that they have to take things slow, so Billy will quickly get on board with that. They can go as slow as they need to. Across town, Cane Ashby (Daniel Goddard) will reveal a secret to Jill Atkinson (Jess Walton). He’ll tell her he kissed another woman and suggest that maybe he should admit it to Lily Ashby (Christel Khalil), too.

Jill will warn Cane to keep his mouth shut instead. She’ll think it’d do more harm than good, especially since Cane will promise he has no feelings for this woman. He won’t mention Victoria’s name, but Jill will contend that his kissing partner sounds like trouble. The Young and the Restless spoilers say she’ll warn Cane to steer clear of her.

Afterward, Jill will meet up with Jack to discuss his restored Abbott status. They’ll be hugging when Kerry spots them. After introductions are made, Kerry will be relieved to know Jill isn’t another ex-wife. Jack will reluctantly admit that they do have a romantic history, so Kerry will once again look concerned.

Back with Nikki, she’ll insist on checking herself out of the hospital. After signing the appropriate paperwork, she’ll put her name on a list to visit Victor at the GCPD. Y&R spoilers say some emotional moments are coming up for Victor and Nikki, so stay tuned.