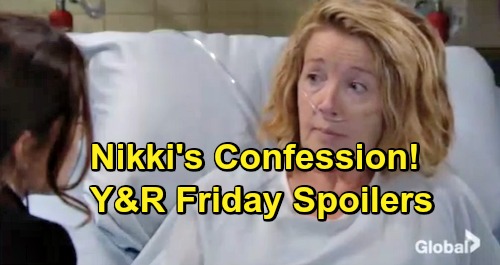 The Young and the Restless (Y&R) spoilers for Friday, January 4, tease that Nikki Newman (Melody Thomas Scott) will show off her fierce side. She’s still recovering from the hit-and-run accident, but she’s not about to let that hold her back.

Nikki hates the idea of Victor Newman (Eric Braeden) going down for killing J.T. Hellstrom (Thad Luckinbill) when she’s the one who delivered the fatal blow.

In Thursday’s new Y&R episode, January 3, Nikki decides she should make a confession. Victoria Newman (Amelia Heinle) will undoubtedly advise against it on Friday, so she may buy some time.

Perhaps Victoria will convince Nikki to hold off for at least a little while. This could all go away if there’s not enough evidence to support the charges against Victor.

However, Nikki will grow increasingly concerned as the drama spirals out of control. It appears a twist or two could hit, so Nikki might start to panic. She may feel like it’d be better to come forward with her side of the story. If Rey makes another discovery and spins his own tale, things could get ugly.

The Young and the Restless spoilers say Nikki will take charge of the situation on Friday. She’ll be desperate to put an end to this nightmare, but will something stop her big confession?

Nick Newman (Joshua Morrow) will be busy investigating the Newman stables fire. Could he find a clue about the arsonist and evidence planter? Will he find proof that could clear Victor’s name?

It’d be interesting if Victor got off the hook right as Nikki was about to come clean. She could back out at the last second and keep the story going a little longer. Of course, there’s much more trouble to come for Nikki and the rest of the cover-up crew. We’re heading into the final J.T. chapter, so it’s bound to get crazy.

In the meantime, Victoria will wonder if “Villy” deserves another chapter as well. Should she give her relationship with Billy Abbott (Jason Thompson) one more try? It hasn’t worked out in the past, but Victoria’s been admiring Billy’s maturity lately. She’s craving love and security right now, so getting back together will be tempting.

The Young and the Restless spoilers say Victoria will decide to go for it at some point. It looks like Billy will be on board, too. Unfortunately, Cane Ashby (Daniel Goddard) and Victoria’s kiss could come back to bite them.

Speaking of that kiss, Cane may open up about it on Friday. He’ll have another chat with Jill Atkinson (Jess Walton), so he may choose to get it off his chest. Spreading the secret could be dangerous, but at least Jill is rooting for Victoria and Billy’s reunion.

She won’t want this news to get out any more than Cane does! We’ll give you updates as other Y&R details emerge. Stay tuned to the CBS soap and don’t forget to check CDL often for the latest Young and the Restless spoilers, updates and news.