BY Heather Hughes on June 20, 2019 | Comments: one comment
Related : Soap Opera, Spoiler, Television, The Young and the Restless 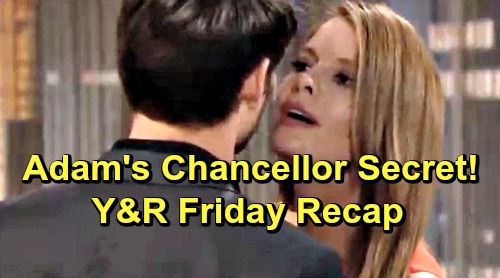 The Young and the Restless (Y&R) spoilers for Friday, June 21, tease that Sharon Newman (Sharon Case) will talk to Rey Rosales (Jordi Vilasuso) about her recent confrontation. She’ll make it clear that she set firm boundaries and Adam Newman (Mark Grossman) is going to stay away from her. Rey will be grateful that Sharon laid down the law with her former flame.

Next, Nick Newman (Joshua Morrow) will arrive seeking Rey’s help. He’ll mention the custody battle and how he needs evidence against Adam. Since Adam will undoubtedly argue that he’s turned his life around, Nick needs to point to some recent shady activities. Rey will suggest he can reach out to Riza Thompson (Tina Casciani) and hopefully score some Vegas dirt.

In the cemetery, Billy Abbott (Jason Thompson) will insist Adam isn’t welcome at Delia Abbott’s (Sophie Pollono) grave. Adam will be sorry for intruding and contend that he wanted to apologize to Delia. He’s not with his family and knows he’s the reason she’s not with hers. Billy will suggest Adam’s behavior shows he’s not even trying to be a better man. He’ll yell at Adam to leave the graveyard.

At Society, Jack Abbott (Peter Bergman) will mingle with Mallory, which will please Traci Abbott (Beth Maitland). The Young and the Restless spoilers say Jack will make a speech about the Abbott-Winters foundation and any donations that are made in Neil Winters’ (Kristoff St. John) name. He’ll promise the money will go toward a treatment program for artists who face challenges getting sober.

Cane Ashby (Daniel Goddard) will enjoy a nice chat with Traci, but he’ll be distracted when Lily walks in. Y&R spoilers say Lily will catch up with Elena Dawson (Brytni Sarpy) briefly before Traci embraces her. Cane will also walk over and make it known that he came with Traci.

Later, Traci will take a breather outside as she reflects on Velma’s feelings as well as her own. Cane will appear soon after to take Traci back to the Abbott mansion. At Newman Enterprises, Victoria Newman (Amelia Heinle) will learn Victor Newman (Eric Braeden) wants her to take over as CEO. She’ll fear that Victor’s condition is worse than it seems, but he’ll just be accepting the reality of the situation.

Victoria will shift gears and suggest Adam’s rejection was a blessing in disguise. She’ll vow to make her dad proud, so she’ll get to work right away. After Billy shows up and hears the news, he’ll be happy for Victoria. However, Billy will also divulge that he had a run-in with Adam at Delia’s grave. He’ll think Victoria needs to keep her guard up when it comes to Adam, but she’ll hint about a way to neutralize him.

Once Billy leaves Victoria, he’ll meet up with Victor and voice his support over the CEO choice. Victor will imply that he doesn’t need Billy’s approval. They’ll take jabs and warn each other about self-destructing. At the coffeehouse, Adam will spot Sharon and talk about the awful day he’s having. He’ll reveal that Victor threw him out of the tack house before he was blasted at Delia’s grave.

Sharon will be willing to listen if Adam needs her, but he’ll opt to head out. He’ll want to keep his promise and not involve Sharon in any of his messes. At Nick’s house, Victoria will drop by and make him an offer. He’ll be agitated when he learns Victoria is now Newman’s CEO. Victoria got what she wanted and Nick’s still suffering, but she’ll think he should join her as COO and gain some power.

Adam tends to be overconfident, so Victoria will think they can work together to push Adam over the edge. She’ll hope they can make Adam tank his chances of getting custody. At the penthouse, Adam will walk in and recall some memories. He’ll reflect on Chelsea Newman (Melissa Claire Egan) and Connor Newman (Gunner and Ryder Gadbois) before Phyllis Summers (Michelle Stafford) struts down the staircase.

Phyllis will assume Adam had her kidnapped, but she’ll note that made her way to Vegas. She’ll explain that she knows about Adam’s interesting connections now – including one to a certain Chancellor family member. Back at the cottage, Sharon will leave Rey out of the loop on her encounter with Adam and express her love.

Across town, Devon will see a vision of Hilary Hamilton (Mishael Morgan) entering his penthouse. Elena will actually be the one coming home. As a panic attack strikes, Devon will struggle to breathe while Elena gets his pills. This will definitely bring some scary moments for the duo.