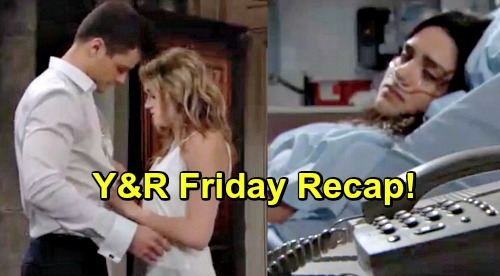 The Young and the Restless (Y&R) spoilers for Friday, March 15, tease that Nick Newman (Joshua Morrow) will push Billy Abbott (Jason Thompson) to keep their plan in motion. He’ll task Billy with tracking down Rey Rosales (Jordi Vilasuso) while he deals with this rushed wedding. Nick will gripe to Summer Newman (Hunter King) about how fast this is happening, but she’ll be cheerful about her big day.

When Phyllis Summers (Gina Tognoni) joins them at Nick’s place, he won’t be happy about it. Nevertheless, Nick will agree to a truce for the nuptials. They’ll try to be civil during Summer’s celebration. At the Abbott mansion, Jack Abbott (Peter Bergman) will point out that Kyle Abbott (Michael Mealor) is dawdling. He’ll note that Kyle could be late for his own wedding if he’s not careful.

Jack will remind Kyle that he doesn’t have to go through with this, but Kyle will stand his ground. He’ll assure his dad that this is what he wants. At the coffeehouse, Mariah Copeland (Camryn Grimes) will vent to Tessa Porter (Cait Fairbanks) about Kyle not returning her texts and calls. They’ll also discuss Sharon Newman (Sharon Case) and the nightmare she’s dealing with.

Later, Mariah and Tessa will make it to the athletic club. They’ll talk to Summer and wonder if Kyle is even going to show up. Y&R spoilers say Summer won’t let anything or anyone to ruin this for her. She’ll be determined to have the wedding of her dreams today, so she’ll leave Kyle a riled voicemail. Summer will remind Kyle that there’ll be consequences if he backs out of tying the knot.

Fortunately, Kyle will arrive to do this for Lola Rosales’ (Sasha Calle) sake. They’ll say their vows and make it official before heading up to a suite. The Young and the Restless spoilers say Summer will let her guard down and admit she’s scared about what’s next. She’ll worry she won’t survive the surgery, but Kyle will offer reassurance. He’ll vow to be there for Summer every step of the way.

It won’t be long until old feelings are stirred up on both sides. Kyle will kiss Summer and the clothes will start coming off. They’ll make love while lonely, hospitalized Lola waits for Kyle to return her call. Elsewhere, Kerry Johnson (Alice Hunter) will continue to manipulate Phyllis and Jack. After chatting with her fake gal pal, Kerry will tell Jack about the plan to target Ashley Abbott’s (Eileen Davidson) company.

However, Kerry is actually working for a mysterious boss. That boss may be Ashley herself, so a major Jabot storm’s brewing. In the meantime, Tessa will calm down a stressed Mariah. Their lives and the lives of those they care about are blowing up, but Tessa will think they can get through it together.

Other Young and the Restless spoilers say Devon Hamilton (Bryton James) and Ana Hamilton (Loren Lott) will patch things up. Each one will feel a bit betrayed, but they’ll be on the same page about moving forward without secrets and overstepping. Ana and Devon will hug it out, but they’ll be right back where they started on next week’s new Y&R episodes when Devon discovers the mysterious Elena Dawson (Brytni Sharpi).

It looks like some fantastic scenes are coming up. We’ll give you updates as other Y&R news emerges. Stay tuned to the CBS soap and don’t forget to check CDL often for the latest Young and the Restless spoilers, updates, and news.