BY Heather Hughes on October 31, 2019 | Comments: one comment
Related : Soap Opera, Spoiler, Television, The Young and the Restless 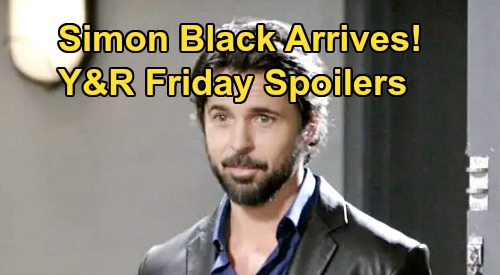 The Young and the Restless (Y&R) spoilers for Friday, November 1, tease that someone mysterious will appear in Genoa City, but he may look familiar to many soap fans. General Hospital viewers might remember Jeffery Vincent Parise, who played Carlos Rivera on GH. Now Parise is set to play Y&R’s Simon Black – and he’s someone Chelsea Newman (Melissa Claire Egan) won’t be happy to see.

Ever since Chelsea returned to town, she’s been adamant that the wicked con life’s behind her. Unfortunately, Chelsea’s about to learn that there’s no time limit on consequences. She may have distanced herself from her past, but she was just delaying the inevitable. The Young and the Restless spoilers say Simon will bop into GC brimming with confidence. He’ll have all the power here, so Chelsea should be shaking in her boots soon.

Simon will deliver some threats in the week ahead, which means Chelsea will probably have to pay up. She may have wronged Simon or someone close to him years ago. Chelsea thought she could put that chapter of her life behind her, but it’s coming back to haunt her in a big way. The good news is Chelsea’s got an account full of laundered money. The bad news is it’d be incredibly risky to drain it.

For now, Simon will likely just approach Chelsea and leave her unnerved. The real danger will come later – and so will major revelations that could derail Nick’s campaign. Speaking of that campaign, Nikki could make a hard decision that’s related to it. The Young and the Restless spoilers say Nick’s councilman run will leave Nikki feeling reflective. She’ll contemplate her own history with politics, which could tie in with this difficult choice she’s making.

Other Y&R spoilers say Amanda Sinclair (Mishael Morgan) will get started on Nate Hastings’ (Sean Dominic) case. However, she’ll keep her guard up when it comes to details about her background. Amanda isn’t eager to let any walls down, but some will indeed tumble in the coming weeks. She can only hold out on us for so long!