The Young and the Restless Spoilers: Friday, November 8 – Chance Recast Debuts – Devon’s Disturbing News, Jig Is Up for Amanda

BY Heather Hughes on November 7, 2019 | Comments: one comment
Related : Soap Opera, Spoiler, Television, The Young and the Restless 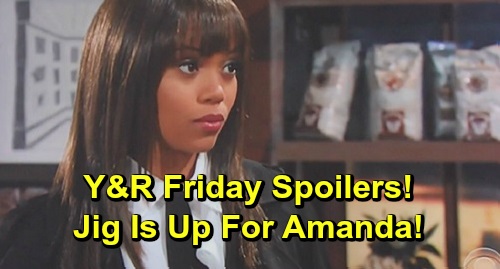 The Young and the Restless (Y&R) spoilers for Friday, November 8, tease that Devon Hamilton (Bryton James) will come home with disturbing news – but that may not be all he has with him. Y&R fans may have heard that there’s a new Phillip “Chance” Chancellor IV. Donny Boaz will take over the role starting this Friday, so it seems likely he’ll play a role in the news Devon delivers.

Devon may have finally tracked Chance down to ask him some questions. Since this whole will thing feels like a giant scam, it’s doubtful Chance has ever been involved at all. Jill Abbott (Jess Walton) has consistently doubted the idea that Chance would be wrapped up in something like this. Chance may return to Genoa City in hopes of setting the record straight.

After all, Katherine Chancellor’s (Jeanne Cooper) last wishes are on the line. Chance will want to make sure those wishes are honored, so he’ll have a good reason to make this comeback. He’ll also find a reason to stick around since Boaz signed a multi-year contract. It’ll be interesting to see where Y&R takes this character once he settles back in GC.

For now, Amanda Sinclair (Mishael Morgan) will try to run from her history. She’s keeping a few secrets, but it’s almost time for them to come out. Amanda can’t keep up her deception forever. She mentioned an “old jerk” that roped her into this mess, and that obviously wasn’t Chance. Amanda tried to act like Chance simply sounded like an old jerk on the phone, but nobody was buying that.

Chance may corner the lying attorney and put her on the spot. Has Chance even met Amanda? If not, he’s going to have a huge problem with Amanda pretending to represent him. The Young and the Restless spoilers say Amanda will hope to escape this nightmare, but the jig will be up. She’ll be forced to make some confessions during the week of November 11-15.