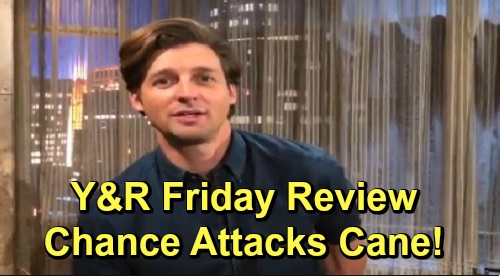 The Young and the Restless spoilers review for Friday, November 8, tease that Devon Hamilton (Bryton James) will be fresh back from a trip halfway around the world to see Tucker McCall (Stephen Nichols). He’ll tell Elena Dawson (Brytni Sarpy) that Tucker was in an ashram/commune where he had divested himself from the material world…and he flat-out denied arranging for Katherine Chancellor’s (Jeanne Cooper) will to be forged.

Devon will say that he believed Tucker, yet he’ll think that the trip was a bust because he got no answers, and apparently he’s still ok with giving Cane Ashby (Daniel Goddard) the bulk of the fortune that he received from Katherine six years ago. However, it would seem that Tucker’s denial would make Devon want to pull the plug on handing over billions of dollars to Cane.

Meanwhile, at The Grand Phoenix, Amanda Sinclair (Mishael Morgan) will be on the phone with someone as she looks at a tracking system on her phone. She’ll tell the person on the other end that she’s glad to have the tracker so she’ll always know where “he” is.

Later, Amanda will meet with Cane in her room at The Grand Phoenix to go over the paperwork on the trust that Cane is setting up for his children. He’ll ask if she’s heard from Chance Chancellor (Donny Boaz), and she’ll say no and sound relieved that her work with him is concluded. Amanda will leave and Cane will call Charlie Ashby (Noah Alexander Gerry) to tell him about the money.

Down in the lobby, Amanda will speak briefly with Nate Hastings (Sean Dominic) and she’ll notice some guy across the room whom she’ll momentarily mistake for someone else. She’ll seem scared for a moment, then express relief when the person turns around. And up in Amanda’s room, Cane will conclude his call with Charlie, when suddenly a very angry Chance will kick open the door, burst in, and punch Cane.

Next, Theo Vanderway (Tyler Johnson) will bump into Adam Newman (Mark Grossman) at Crimson Lights. Adam will reveal that he knows about Theo being a newfound member of the Abbott family. Adam will say that he found out that he was part of the Newman family at about Theo’s age, and after a little back-and-forth, he’ll warn Theo not to take advantage of his friend Jack Abbott (Peter Bergman).

Later, Theo will be sitting alone on the patio when his father’s spirit comes to him. He’ll talk with his dad, Eric Vanderway (Jon Briddell), who will give his son a little advice. He’ll insist that the Vanderways were his family and that he had a good life. Theo will wonder if he should embrace the Abbotts or back off, and Eric will tell him that the only opinion that matters is his own. Theo will want his dad to stay, but he’ll leave after telling Theo that he has a good heart and a good head on his shoulders.

Finally, Chelsea Lawson (Melissa Claire Egan) went to see Adam at his penthouse after yet another run-in at The Grand Phoenix with Simon Black (Jeffrey Vincent Parise). She’ll angle for Adam to take Connor Newman (Judah Mackey) away for a few days, to the farm where he grew up. Adam will like the idea, but he’ll be suspicious of why Chelsea is pushing for this. After some back-and-forth, Chelsea will say that she’s just overwhelmed and has a lot on her plate.

In the end, Adam will agree to take Connor and go this evening, but he will still be concerned about why she seems to want Connor out of town. He’ll let it drop for the moment, though, and Chelsea will look quite relieved once she’s outside the penthouse doors. Given ongoing Y&R spoilers, it looks like Adam will soon find out all about the threat Simon poses, so he may do some snooping around into what Chelsea’s gotten herself into.