The Young and the Restless Spoilers: Friday, October 11 Review – Cane Walks Into A Trap – Victor Ends Surveillance Of Adam

BY hellodrdavis on October 11, 2019 | Comments: one comment
Related : Soap Opera, Spoiler, Television, The Young and the Restless 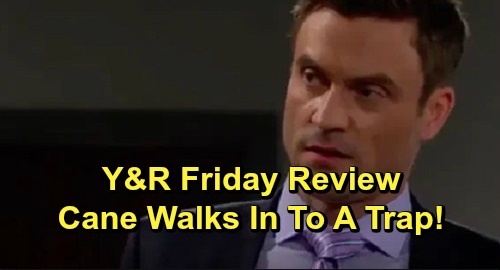 The Young and the Restless spoilers review for Friday, October 11, tease that Cane Ashby (Daniel Goddard) will chat again with Phyllis Summers (Michelle Stafford) in Las Vegas. She’ll hound him by text, then will show up at his door wanting information. She’ll desperately try to get Cane to tell her why he’s looking for Chance Chancellor (John Driscoll) and exactly what bomb he dropped on his family. Cane will play coy and demand to know why she’d even be interested in Chance.

Phyllis will explain that she needs leverage to get Adam Newman (Mark Grossman) to return to Genoa City, but frankly her rationale will sound hollow and lame, and Cane won’t buy it. Cane will then get a text and he’ll end up asking Phyllis to leave. After she goes, he’ll read the text, which will be allegedly from Chance, who won’t want to meet in public. Later, Cane will arrive at what looks to be an industrial site. He’ll call out for Chance, then someone will knock him unconscious and drag him away.

Meanwhile, back in Genoa City, Victor Newman (Eric Braeden) will share with Nikki Newman (Melody Thomas Scott) and Nate Hastings (Sean Dominic) that he has permanently stepped down as Newman Enterprises CEO. Nate will think that sounds great for his health, and Nikki will be thrilled. After Nate leaves, Nikki and Victor will chat about his retirement, which he won’t be looking forward to, and they’ll discuss how Victor nearly made a mistake by handing over the company to Adam instead of Victoria Newman (Amelia Heinle).

They’ll talk about how Adam is gone and now hopefully Victor can enjoy retirement with Nikki and their family can come together. Victor will absorb all of this, then when alone he’ll call someone and instruct them to call off the surveillance of Adam and he’ll remark that Adam isn’t coming back. Of course, Y&R viewers know that Adam will eventually return to Genoa City, so Victor shouldn’t plan to be rid of his son for the long haul. The only question now is exactly what brings Adam back.

Finally, on the new episode of Y&R on Friday, October 11, Elena Dawson (Brytni Sarpy) will find herself concerned about Devon Hamilton (Bryton James). She’ll come home to find him absorbed in his online research into Amanda Sinclair (Mishael Morgan). He won’t want to hire someone do to this; he’s got to do it himself. He’ll tell Elena that he discovered that the statute of limitations for contesting Katherine Chancellor’s (Jeanne Cooper) will has run out, and Elena will think that this means he should drop the whole Amanda and will obsession.

But Devon won’t be able to let it go. He’ll say that Amanda has virtually no internet presence, and that he’s having Tucker McCall’s (Stephen Nichols) assistant flown to Genoa City to help answer some questions. Elena won’t get why he’s so into all of this, and later, she’ll confess to Nate that she’s worried about Devon, especially because Amanda looks like Hilary Hamilton (Mishael Morgan). Nate will do his best to reassure her, but clearly she’ll be concerned about the Hilary factor.