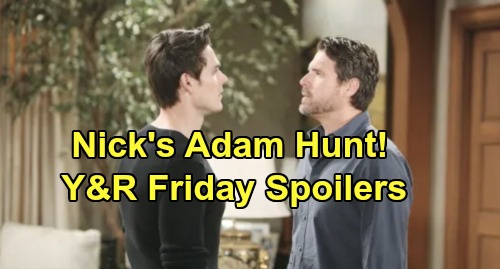 The Young and the Restless (Y&R) spoilers for Friday, October 18, tease that we’ll finally see what’s happening with Cane Ashby (Daniel Goddard). Y&R fans know Cane was summoned to a shady meeting spot in Vegas. He got a text that was supposedly from Chance Chancellor, which advised him to come alone.

Cane was bashed over the head and dragged away, but who’s behind the kidnapping? Colin Atkinson (Tristan Rogers) is certainly an option to consider. He wouldn’t be above knocking his own son out or at least ordering someone else to. Colin may have a minion carrying out this part of the plot, but we’ll just have to see how it goes.

Of course, there’s a possibility Chance is actually involved in some capacity. He may be in over his head, but he could still be wrapped up in this. Whatever the case, Cane will hit the mother lode on Friday. The Young and the Restless spoilers say Cane will find answers and opportunities galore, so perhaps someone will fill him in on this whole will scheme. Some shocking discoveries await!

Back in Genoa City, Chelsea Newman (Melissa Claire Egan) will feel better about the Connor Newman (Judah Mackey) situation. Connor’s behavior will continue to improve, so she’ll feel like things are on the right track. Chelsea will be grateful for Nick Newman’s (Joshua Morrow) support, which will lead to some passionate moments. She’ll put any lingering anger over Victor Newman’s (Eric Braeden) fake death behind her, so Nick will appreciate that.

Unfortunately, Chelsea is lulling herself into a false sense of security. The Young and the Restless spoilers say Connor will ultimately act out again. Nothing’s truly going to change without Adam Newman’s (Mark Grossman) presence in town. Nick will wind up heading to Las Vegas next week, so he’ll hope to bring Adam back and end Connor’s sorrow.

In the meantime, it looks like Abby Newman (Melissa Ordway) may cross paths with Nate Hastings (Sean Dominic). Nate recently dumped Abby, but are they truly over? That’s something Abby might wonder during their next chat. Y&R spoilers point to more communication struggles, so they may not be able to get on the same page. Whether this breakup sticks or not, they don’t seem like a very good match.

Both Nate and Abby deserve love, so let’s hope they find it sooner or later. Nate could be on the verge of falling for Amanda Sinclair (Mishael Morgan), but it’ll take a while before they take any firm steps. They have some trust issues to work through, but that could become easier once the truth about the will is revealed.