BY Heather Hughes on September 26, 2019 | Comments: one comment
Related : Soap Opera, Spoiler, Television, The Young and the Restless 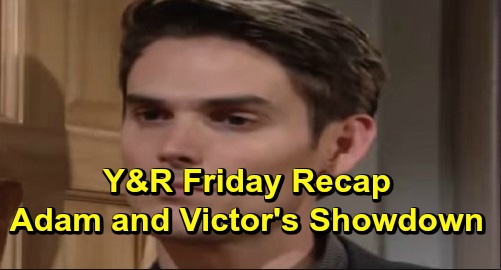 The Young and the Restless (Y&R) spoilers recap for Friday, September 27, teases that Nick Newman (Joshua Morrow) will drop by Adam Newman’s (Mark Grossman) penthouse. He’ll invite Adam to Victor Newman’s (Eric Braeden) memorial and contend it’s what their dad would want. The brothers will do some bickering before Nick exits. That’ll leave Adam to break down in tears on the floor alone.

At the ranch, Nikki Newman (Melody Thomas Scott) will worry that Adam won’t agree to attend the service. It’s the next step of their plot, so it’s crucial for Adam to be there. Victor will be certain Adam will show up. Moments later, Summer Newman (Hunter King) will arrive. Once Victor’s out of sight, he’ll listen as Summer gets emotional about how much her grandpa meant to her.

Nick will console Summer before she heads out. Y&R spoilers say Victor will reappear with an apology for Nick, Nikki and Victoria Newman (Amelia Heinle). He’ll be sorry about putting them all through this nightmare. The Newmans couldn’t risk Summer tipping off Phyllis Summers (Michelle Stafford), so they’ll discuss that briefly. They’ll all be on the same page about being there for Connor Newman (Judah Mackey) after Adam lands behind bars.

Victor will mention how he wished Adam would’ve shown some remorse. Once he leaves the room, Nikki will fear that Victor isn’t going to get the ending he wants here. She just won’t think Adam’s capable of giving it to his father.

At Adam’s penthouse, Phyllis will pop in and notice his luggage. She’ll realize Adam’s leaving, so she’ll urge him to stick around and take charge at Newman. Adam will point out that Victor wasn’t supposed to die because of his scheme. Phyllis will feel like Adam’s letting the guilt get to him. She’ll contend that Victor’s still the victor – even in death. Adam will turn down Phyllis’ hug, but he’ll give her the keys to his penthouse before he departs.

Afterward, Adam will head to the park and tell Chelsea he’s leaving town for good. She’ll be livid with Adam for abandoning Connor after they’ve reconnected. Chelsea will insist that Adam needs to come over to Nick’s place and inform the kid himself. Adam will indeed break the news to Connor, who’ll be devastated and fear his dad’s mad at him. After Adam offers reassurance, Connor will beg Chelsea to make him stay. He’ll insist he doesn’t want Nick for a dad before he runs out of the room crying.

Just as Adam’s about to leave, he’ll get a text that leaves him shocked. At the ranch, Adam will waltz in to find Victor sitting at the chessboard. He’ll tell “Pops” this was well-played. Over with Michael Baldwin (Christian LeBlanc), he’ll catch up with Kevin Fisher (Greg Rikaart) at Crimson Lights. Michael will point the finger at Adam, but he’ll admit he’s still stuck. After Kevin gets updates on the Fenmore “Fen” Baldwin (Zach Tinker) situation, he’ll want to help by finding digital evidence against Adam.

Soon after, Kevin will bump into Paul Williams (Doug Davidson) and ask for his old job back. It’ll take some convincing, but Paul will ultimately get on board. Once Kevin’s gone, Paul will turn his attention to Michael. They’ll discuss the pharmacist, who was busted trying to leave the country. Once the woman knew her immunity deal was in jeopardy, she spilled a very different tale to the GCPD.

Michael will head to Adam’s penthouse next, but he’ll find Phyllis instead of who he’s seeking. The Young and the Restless spoilers say she’ll wonder what Michael knows, but he’ll push Phyllis to go first. Michael will believe Phyllis has to be hiding something.

At Society, Kyle Abbott (Michael Mealor) will share some tender moments with Lola Abbott (Sasha Calle). He’ll reflect on Victor’s passing and how it’s made him look at what’s really important. Talk will turn to Kyle supporting Summer, which Lola will approve of. She’ll be glad their friendship’s back on track, but Kyle will complain about Theo Vanderway (Tyler Johnson) being the man in Summer’s life.

The Young and the Restless spoilers say Kyle will add that Theo’s a ticking time bomb. He’ll wish his former buddy would head back to New York. After Kyle spots Lola’s bandaged finger, she’ll stay tight-lipped about her previous chat with Theo.

At the Grand Phoenix, Mariah Copeland (Camryn Grimes) will call Theo out for hitting on Tessa Porter (Cait Fairbanks). He’ll downplay it at first, but he’ll get serious once Mariah brings up sexual harassment training. Theo will assure Mariah that he won’t cross the line again. After Summer walks in, Mariah will offer her condolences regarding Victor.

Theo will eventually take Summer up to a suite, which will leave her appalled. She’ll be upset that Theo wants to sleep with her when she’s drowning in grief. Theo will insist he only wanted to provide a distraction. He’ll be apologetic, but Summer will snap about Kyle knowing how to handle it better. She’ll contend that Kyle’s answer to everything isn’t getting naked.

Theo will be disappointed since he confided about his deceased father and Summer ran right off to Kyle. They’ll patch things up before Theo pulls Summer in for a warm embrace. It sounds like Summer’s love life’s getting messier by the second. We’ll keep you posted as other Y&R details emerge. Stay tuned to the CBS soap and don’t forget to check CDL often for the latest Young and the Restless spoilers, updates and news.