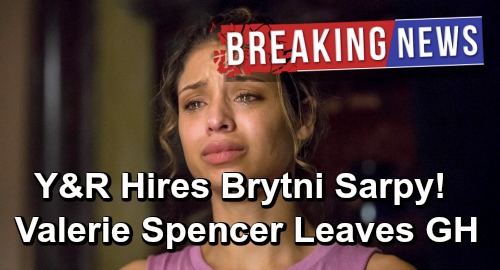 The Young and the Restless (Y&R) spoilers tease that a brand-new character is headed to the CBS soap from General Hospital, but she might look familiar if you’re a fan of other daytime dramas. According to Soap Opera Digest, Brytni Sarpy has joined the cast of Y&R. She started playing the role of Valerie Spencer on General Hospital back in 2015, but she’s trading her Port Charles home for one in Genoa City!

Valerie hasn’t been used much on General Hospital lately, but she’s a solid actress who comes across as likable on screen. GH had been hinting at a new story for Valerie, who just became a detective and shared a surprising kiss with her best gal pal. However, it was slow to get off the ground and now it’ll be over before it ever really began.

That’s because Y&R saw some great potential and snatched Brytni Sarpy up. She’s on contract, so they locked her in and made sure she’d stay in GC for a while. General Hospital’s loss will be The Young and the Restless’ gain, although we’re willing to bet not everyone will see it that way. Many viewers have complained about the flood of newer characters, but perhaps they should give this one a pass.

Since Sarpy will begin taping next week, February 11-15,  it appears she’ll be filming the new writer’s content. Mal Young, Y&R’s former head writer and executive producer, had some material left to play out when he left, but it’s winding down. It looks like Sarpy’s character is a creation of the new head scribe, Josh Griffith.

That’s reason enough to give her a shot. Griffith might surprise us with a well-written, engaging character. No much is known about her other than her name will be Elena Dawson, but we can guess who she might be paired up with.

Devon Hamilton (Bryton James) could really use a new love interest. He’ll have to move on from Hilary Hamilton (Mishael Morgan) sooner or later, so Elena might be the perfect fit. Nobody’s suggesting that Y&R can recreate that “Hevon” magic, but that shouldn’t stop Devon from finding love again.

The Young and the Restless spoilers say Elena will interact with several key characters right off the bat. It’s possible she’ll have a connection on canvas. There’s always a chance Kerry Johnson (Alice Hunter) has a half-sister or perhaps a full sister who kept her married name after a divorce.

Regardless, Sarpy is making the jump from General Hospital to The Young and the Restless, so fans will want to tune in and get to know Elena. We’ll give you updates as other Y&R news comes in. Stick with the CBS soap and don’t forget to check CDL often for the latest Young and the Restless spoilers, updates, and news.