BY Sean O'Brien on April 7, 2019 | Comments: one comment
Related : Soap Opera, Spoiler, Television, The Young and the Restless 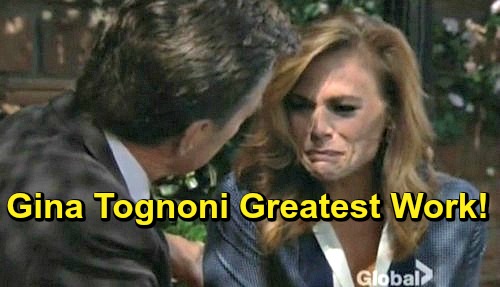 The Young and the Restless spoilers documented Gina Tognoni’s (Phyllis Summers) fine run on this iconic soap opera. Now, with only a few weeks of scenes remaining, in what will end her time as this character, a Marco Annicelli (Peter Bergman in a dual role) reference stirred the emotions of affected characters. At the same time, hardcore audience members recall that arc as, arguably, the greatest performance of Tognoni’s Y&R tenure.

Phyllis and Jack (Peter Bergman) are in the Abbott living room discussing current topics when a horrid period in Phack’s lives is referenced. Tognoni’s softer edition of Phyllis begins to break down when she suddenly mentions that it was her fault for not having recognized Marco wasn’t Jack. Bergman’s main alter ego corrects his still seeming true love in what could be tapped as the start of Tognoni’s wrap. 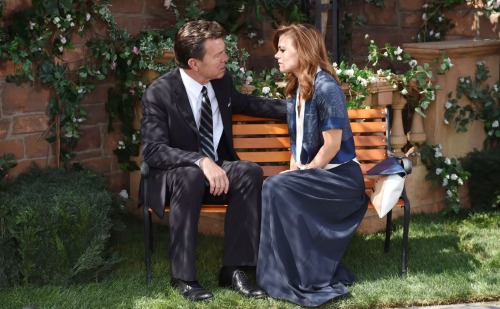 The Moustache took advantage of Kelly’s fragile state, as part of his realized plan to replace Jack with a doppelganger. Kelly held Jack captive on an island until he was able to escape after she died. Jack then sailed home on a ship, where he met Marisa (Sofia Pernas).

The above replay was needed because Tognoni was working in the first months of her contract, after having debuted as the Phyllis recast in late 2014. The Marco arc would serve not only as her first truly meaty storyline, but also, in retrospect, her most defining.

Michelle Stafford has recently agreed to return to the soap that made her famous and will soon be seen as the original Phyllis. Before that happens, the audience has a chance to consider, compare, and likely admire what Tognoni accomplished during the past four-plus years.

At the time she was signed to replace Stafford, Tognoni was tasked not with presenting a secondary edition of this classic character. No, she was given a series of scripts, that followed the Shick remarriage stop, which took Phyllis to a much softer place.

Tognoni’s skills were tapped so the viewers could see another version of Phyllis and they did. Within this genre, various actor replacements allow daily, episodic shows to craft alternative views of well-known alter egos. Doing so helps to sustain and refresh interest.

Phyllis was broken by the Marco incident and has never fully recovered. While Stafford’s Phyllis had similar ups and downs, her version was harder-edged.

Tognoni took this character to different emotional places, with the possible exception of Phyllis becoming the Coverup Crew’s fixer. Though even that arc ended with Red wanting to help the people she sold out for immunity.

Due to her long, two-part stint and now, return, Stafford will always be seen as the towering Phyllis. But Tognoni, who is also a great actor and a fellow Daytime Emmy Award winner for this role, should be remembered as someone who succeeded by making the audience feel for a character they’ve known for twenty-five years. That is laudable.