BY Heather Hughes on January 18, 2019 | Comments: one comment
Related : Soap Opera, Spoiler, Television, The Young and the Restless 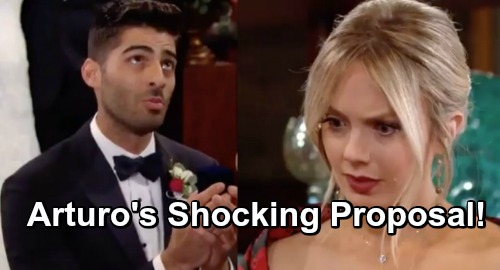 The Young and the Restless (Y&R) spoilers for the week of January 21-25 tease that several Genoa City residents will face shockers. For starters, Abby Newman (Melissa Ordway) will get a big one thanks to Arturo Rosales (Jason Canela). He’ll decide he’s ready to make a real commitment and prepare for a future with Abby. Naturally, that means popping the question.

Once Arturo gets an engagement ring, he’ll have to plan the actual proposal. Arturo will need to pick a time and place for this life-changing event. The Young and the Restless spoilers say Mia Rosales (Noemi Gonzalez) won’t approve of Arturo’s choice! He’ll end up stealing the spotlight at Mia and Rey Rosales’ (Jordi Vilasuso) vow renewal ceremony, so Y&R fans can expect Mia to fume.

Rey may not think it’s a huge deal. He’s finally starting to bond with his brother again, so he’ll just be happy Arturo’s got a woman that isn’t Mia. Of course, Rey doesn’t know what’s going on behind his back. Mia is relentlessly pursuing Arturo and trying to sabotage his romance with Abby. She’s flirting with disaster here, so her marriage is destined to fall apart.

As for Arturo, he’ll anxiously await Abby’s answer. The Young and the Restless spoilers say Abby won’t look too happy at first. She may not like that Arturo turned a special moment into a public spectacle. It should be clear to Arturo that this was more about sending a message to Mia. However, Arturo will manage to smooth things over. It probably won’t be long until Abby agrees to tie the knot.

Other Young and the Restless spoilers say Cane Ashby (Daniel Goddard) will threaten Billy Abbott (Jason Thompson). After Billy fills Lily Ashby (Christel Khalil) on the kisses between Cane and Victoria Newman (Amelia Heinle), Lily will be left reeling over the betrayal. Cane will worry that he can’t undo this kind of damage. He’ll end up punching Billy in the face and vowing to make him regret this.

Meanwhile, Sharon Newman (Sharon Case) will mull over Phyllis Summers’ (Gina Tognoni) dangerous plan. Phyllis will insist that Victor Newman (Eric Braeden) could pin J.T. Hellstrom’s (Thad Luckinbill) murder on them. She’ll want to forget about the fab four and focus on a two-way alliance instead.

Sharon won’t agree with Phyllis’ fears at first, but it seems paranoia will be contagious. After something happens with Nikki Newman (Melody Thomas Scott) and Victoria, Sharon will meet back up with Phyllis. She’ll insist that the Newmans are conspiring against them, so Phyllis will think they have to do something about it. This secret partnership could backfire if they aren’t careful!

It sounds like another great week’s ahead on the CBS soap. We’ll give you updates as other news comes in. Stay tuned to Y&R and be sure to check CDL often for the latest Young and the Restless spoilers, updates, and news.