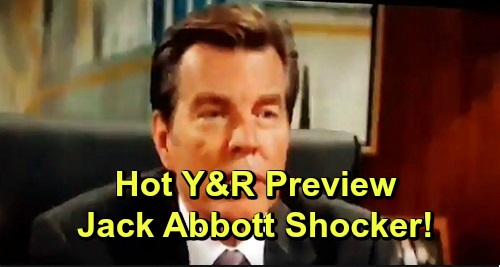 The Young and the Restless (Y&R) spoilers for the week of September 30-October 4 tease that some surprises are in store. Y&R’s latest preview video points to several major shockers. First, let’s talk about Adam Newman’s (Mark Grossman) visit with Victor Newman (Eric Braeden). Friday’s episode brings Adam face to face with his presumed dead dad, so they’ll have a lot to talk about once Monday rolls around.

Adam will suggest he came to see Victor for himself and tell his father he’s leaving town. Victor and Adam will undoubtedly have a tense conversation about the pill swap. It was a low blow, but Adam clearly has remorse for what he did. He never meant to kill Victor, so he’ll be glad to know he didn’t.

However, this whole situation will make it clear to Adam that he needs to put Genoa City behind him. He’s been exiled by his family, so he just doesn’t see the point of sticking around. Although Adam loves Connor Newman (Judah Mackey), he believes bailing on him is the best thing he could do for the kid.

Will Victor soften toward Adam once he sees the pain in his son’s eyes? Will he encourage Adam to stay in GC? Regardless, Adam probably won’t get very far. There should be a warrant for his arrest soon thanks to the pharmacist’s new story. Some evidence should surface against Adam, which will likely lead to murder charges.

Of course, those will have to be reduced to attempted murder once the truth about Victor comes out. There’s always a chance Victor will make this mess disappear though. He’s all powerful and notorious for changing his mind about how he views his children, so Adam may get a helping hand.

Before Victor’s faked death is exposed publicly, Nick Newman (Joshua Morrow) will come clean to Chelsea Newman (Melissa Claire Egan). Once Chelsea sees how agitated Nick is, she’ll remind him that he’s grieving. Nick will eventually blurt out that his father’s alive, so Chelsea will lash out over all the pain he’s caused. Not only was Connor crushed by his grandpa’s “death,” his beloved dad’s walking out of his life!

Chelsea will hold Nick responsible for Connor’s heartache, so that’ll bring quite an argument. There’ll be some arguments over at Devon Hamilton’s (Bryton James) penthouse, too. Amanda Sinclair (Mishael Morgan) will read the supposedly accurate will aloud as Devon, Cane Ashby (Daniel Goddard) and Jill Abbott (Jess Walton) listen. You can bet Amanda won’t say Devon’s name as the one inheriting over $2 billion.

Naturally, there’s no guarantee Amanda’s claims are true – even with the pages she’ll suddenly produce. Cane may be caught up in this mess with Chance Chancellor, so he’ll be on the hot seat at some point during all this. At Jabot, The Young and the Restless spoilers say Kyle Abbott (Michael Mealor) will be excited about the future. He’ll look forward to being Jack Abbott’s (Peter Bergman) right-hand man from now on.

Jack will confess that’s not going to happen since he’s stepping back from the company. He’ll mention the book he’s writing with Traci Abbott (Beth Maitland), which he’ll be devoting most of his time to. What does that mean for Jabot? Will Kyle slide back into the CEO position? Billy Abbott (Jason Thompson) will be on hand for this discussion, so The Young and the Restless spoilers say he should have an opinion on this.

If Billy tries to vie for his shot at the throne, it’ll be pretty ridiculous. Billy was so out of his mind that he had to be held hostage in a boathouse. He doesn’t need to be running a major corporation; he needs to be going to more therapy sessions and making sure he doesn’t slip back into that dark place.

Whatever happens, let’s hope the Abbotts can all get on the same page! We’ll give you updates as other Y&R news comes in. Stay tuned to the CBS soap and don’t forget to check CDL often for the latest Young and the Restless spoilers, updates and news.