The Young and the Restless Spoilers: J.T. Hellstrom’s Y&R Exit – Redemption or Death?

BY Sean O'Brien on March 24, 2019 | Comments: one comment
Related : Soap Opera, Spoiler, Television, The Young and the Restless 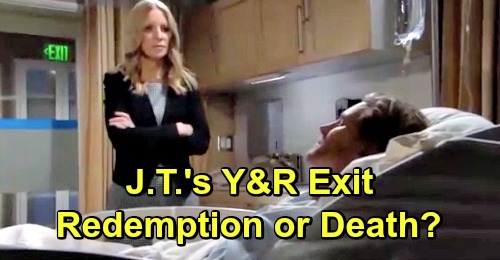 The Young and the Restless spoilers tease that J.T. Hellstrom’s (Thad Luckinbill) storyline is in the process of wrapping. Before the finale arrives, let’s recall some of this arc’s top moments. Of course Y&R viewers still can’t be sure if J.T. will exit Genoa City redeemed or dead.

Luckinbill’s return to Y&R’s cast in late 2017 was surprising. Viewers didn’t know at the time that the actor agreed to reprisal a role that was about to move in a shocking new direction. Erratic behavior began to appear as the months followed. Sometimes J.T. was simply irritable, at others he was violent.

A chilling scene between Luckinbill and Amelia Heinle (Vickie) played out in the living room of what originally was Villy’s honeymoon home. Vickie slapped J.T., who then pushed her numerous feet across the floor.

Vickie’s back and head were pressed against the closet, with J.T.’s left hand around her neck and his right hand slamming against the wall just aside of her face. J.T. apologized, Vickie accepted, they made love, but the precursor to April 13, 2018 was set.

J.T.’s failed attempt to find the dirt Paul (Doug Davidson) and Christine (Lauralee Bell) needed to charge Victor with price-fixing led to one of the great visual scenes in recent Y&R history. A physical brawl between J.T. and Victor (Eric Braeden) bled into the second floor at the Newman Ranch. After vicious exchanges, Victor was sent backwards down the stairs.

The episode ending scene showed Braeden’s character helplessly flailing in the air via slow motion, followed by a thud on the first floor. J.T. peered at his victim, didn’t descend the stairs and left the property.

J.T. later followed up by turning off a critical medical device at Genoa City Memorial hospital, in what became a second failed attempt to end Victor’s life.

Nick’s (Joshua Morrow) morph into J.T., via a synthetic mask, was eerie. Viewers knew that Luckinbill was actually part of some scenes and that Morrow wasn’t always the fake J.T., but were nevertheless struck by what became the first return of the never-dead man.

Katie’s (Sienna Mercuri) invisibly friend was never seen clearly. Who was the mystery man that embedded a surveillance system inside the Newman Ranch walls? Billy (Jason Thompson) later said that his daughter sang a song that J.T. and Reed (Tristan Lake Leabu) shared.

With J.T. having explained how he survived being buried alive, via a storm drain that was located under the Coverup Crew’s dug grave at Chancellor Park, the fate of the tormented villain is nearing its end. Luckinbill’s character, who has been suffering from a major health trauma for more than a year, is still capable of redemption but death is also an option. Whether that happens will soon play out in the finale of this compelling drama.

Of course, readers are welcome to comment on, or add to the moments that were listed. CDL is a leading source for everything linked to The Young and the Restless. Check back regularly for Y&R spoilers and news!