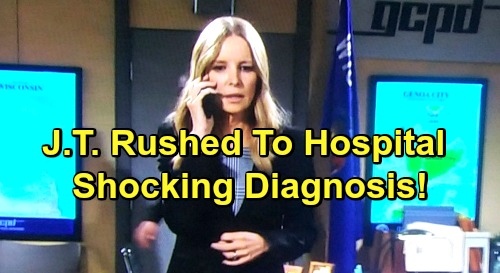 The Young and the Restless (Y&R) spoilers tease that some crucial choices will have to be made at the cabin. Nick Newman (Joshua Morrow), Victor Newman (Eric Braeden), Billy Abbott (Jason Thompson), Phyllis Summers (Gina Tognoni) and eventually Rey Rosales (Jordi Vilasuso) will fear the worst outside. They won’t know about the gas leak at first, but they’ll know J.T. Hellstrom (Thad Luckinbill) must be armed and dangerous.

Fortunately, the gang will work together to save Nikki Newman (Melody Thomas Scott), Victoria Newman (Amelia Heinle) and Sharon Newman (Sharon Case) before it’s too late. Each woman will be pulled from the fume-filled cabin, but what about J.T.’s fate? The guys may debate whether to save him or just let him die. They’ll end up making the right call, so J.T.’s life will be spared along with the others.

The Young and the Restless spoilers say J.T. will be rushed to the hospital following this ordeal. He was in total agony before he passed out. It seems obvious that J.T. has a brain tumor or an aneurysm, so he’ll likely be diagnosed by Dr. Nate Hastings (Brooks Darnell) soon enough.

Of course, it’ll take some time for tests and all the usual hospital drama. The ladies will undoubtedly be hospitalized as well. That’s probably what’ll bring Christine Williams (Lauralee Bell) down to speak with the fugitives. The Young and the Restless spoilers say she’s in for a huge shock when she arrives.

Christine fought so hard to get justice for this murder victim, but he wasn’t murdered and he wasn’t really a victim either. Y&R fans know J.T. earned that blow to the head. He didn’t deserve to be buried alive, but the cover-up crew members were frantic. We can’t blame them too much for not knowing J.T. was still breathing.

However, this potential brain tumor/aneurysm diagnosis will throw everyone for a loop. It appears J.T.’s condition drove him off the deep end and he wasn’t legally responsible for his actions. Regardless, Christine will have to eat crow when she finds J.T. in a hospital bed. It’s doubtful she’ll want to go easy on the girls’ night gang, but the charges will have to be reduced. There’s no getting around that.

Bottom line, J.T.’s survival will help Victoria, Sharon and Nikki a great deal. Christine needs to let this mess go before any more embarrassment is brought on the GCPD! We’ll give you updates as other Y&R news comes in. Stay tuned to the CBS soap and don’t forget to check CDL often for the latest Young and the Restless spoilers, updates and news.