The Young and the Restless Spoilers: J.T.’s Alive, Back For Revenge – Targets Phyllis for Turning Reed Against Dad?

BY Marcy Cohen on January 6, 2019 | Comments: one comment
Related : Soap Opera, Spoiler, Television, The Young and the Restless 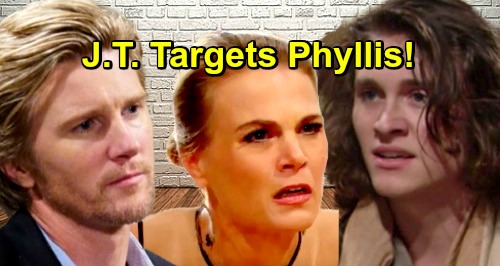 The Young and the Restless (Y&R) spoilers tease that Reed Hellstrom (Tristan Lake Leabu) will plan a memorial service for his father. Now that all the cops’ evidence points to J.T. Hellstrom’s (Thad Luckinbill) death, Reed has accepted it and wants to say goodbye. He’ll get Victoria Newman’s (Amelia Heinle) approval along with some help putting together a small farewell gathering.

Reed will have some kind words to say about J.T. Y&R fans know J.T. wasn’t a good guy overall, but he was still Reed’s dad and he had his moments. When Nikki Newman (Melody Thomas Scott) sees how distraught her grandson is, she’ll be tempted to unburden herself. Reed came clean about the hit-and-run accident, so lying about something this huge will be tough for Nikki.

Phyllis Summers (Gina Tognoni) will notice that Nikki’s on the verge of spilling too much. In a desperate and questionable move, Phyllis will get up to say a few words herself.

She’ll end up announcing to the whole room that J.T. abused Victoria before his demise. Phyllis may think it’ll remind Nikki of what a monster J.T. was and stop the confession, but it’ll also leave Reed furious.

The Young and the Restless spoilers state that Reed won’t believe Phyllis at first. He’ll call her a liar until Victoria intervenes and confirms that it’s true. That’s when Reed will grab J.T.’s nearby portrait and smash it.

He’ll hate that his father was capable of something like that. Reed may say some pretty harsh things once his anger’s at an all-time high. He might even declare that he’s glad J.T. is dead.

Of course, this could cause some chaos if J.T. is actually still alive. That’s especially true if he’s monitoring Victoria’s house, where the memorial will be held. It makes sense that J.T. would keep tabs on the cover-up crew.

J.T. was watching Victoria’s every move before, so why wouldn’t he now? J.T. would have to be in the loop on their activities if he’s the one currently targeting them.

Victor Newman (Eric Braeden) has been framed for J.T.’s murder and Nikki Newman was tormented by J.T.’s old clothes in her bed. If J.T. realizes Phyllis turned his son against him, she could become J.T.’s next target. He may make Phyllis pay for exposing the truth to Reed and tainting the teen’s memories of him.