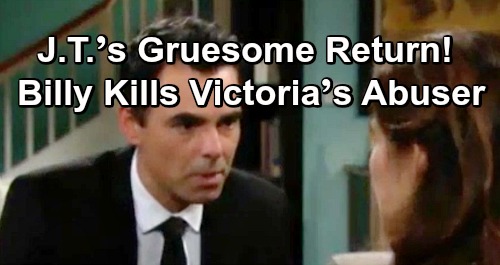 The Young and the Restless (Y&R) spoilers reveal that shocking clue has surfaced about the end of the J.T. Hellstrom (Thad Luckinbill) story. This hot plot has brought many twists and turns since last April, but there was still several to come. Of course, Y&R has a mystery in play that ties in with all this. Everyone’s wondering who’s framing Victor Newman (Eric Braeden) and taunting the cover-up crew.

There’s no confirmation yet on this person’s identity, but J.T. himself makes a lot of sense. His survival would help the girls’ night gang wiggle out of the worst of their troubles. They might face other charges, but at least murder wouldn’t be one of them.

Victoria Newman (Amelia Heinle), Nikki Newman (Melody Thomas Scott), Sharon Newman (Sharon Case) and Phyllis Summers (Gina Tognoni) would all be relieved about that. However, throwing J.T. behind bars or letting him get away wouldn’t be satisfying conclusions to this saga. After nearly a year of this crazy mess, The Young and the Restless fans want this storyline to end on a truly shocking note.

What would be a fitting end for J.T. the abuser and tormentor? J.T. had some good in him once upon a time, but it’s clearly long gone – especially if he’s still “haunting” the burial posse and setting Victor up. If J.T. somehow survived that ordeal, perhaps he won’t be so lucky next time. Will Y&R bring J.T. back only to kill him off for real?

A new hint may point in that direction and it just might reveal the true killer. In Friday’s episode of The Young and the Restless, Billy Abbott (Jason Thompson) makes an awfully ominous statement. After the truth about the abuse comes out, Billy is disgusted by how J.T. treated Victoria. He wishes J.T. were still alive so he could kill him!

If J.T. is indeed still out there tormenting, maybe Billy will get the chance. It’d be an interesting way to build on the bond they’re establishing between Billy and Victoria. The exes are in the process of a slow reunion, but rushing to Victoria’s rescue might quicken the pace.

Now that J.T. has potentially targeted Victor and Nikki for revenge, how long will it be until he comes for Victoria and the others? It’s easy to imagine Billy intervening and killing J.T. to defend them. We mean actually killing him this time. As in dead as a doornail and on a slab in the morgue.

Billy would probably do the sensible thing and explain the whole story to the cops, which is what the cover-up crew should’ve done in the first place. Then again, Billy could find himself in hot water if the move is an act of revenge and nothing else. It’s hard to believe Billy would really go there, but we can’t rule it out.

After all, Billy has proven that he’s impulsive when it comes to vengeance. Just look at what happened after Phyllis betrayed him with Nick Newman (Joshua Morrow). Billy hopped in bed with Phyllis’ daughter, Summer Newman (Hunter King), almost immediately. He’s the kind of guy who tends to act now and battle regrets later.

Do you think Billy’s statement about killing J.T. is significant? Will he be the one to get rid of J.T. permanently? We’ll give you updates as other Y&R news comes in. Stay tuned to the CBS soap and don’t forget to check CDL often for the latest Young and the Restless spoilers, updates and news.