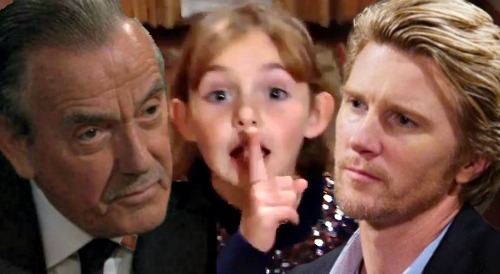 The Young and the Restless (Y&R) spoilers tease that Victor Newman (Eric Braeden) will prepare to take some risks. It’s clear that he’s dealing with a vicious enemy. The same goes for the cover-up crew, but you’ll notice that Victor and those closest to him are the main targets.

Phyllis Summers (Gina Tognoni) and Sharon Newman (Sharon Case) are certainly part of this mess, but Nikki Newman (Melody Thomas Scott) has been tormented the most. Now Victoria Newman (Amelia Heinle) is about to get a good dose of turmoil thanks to Katie Abbott’s (Sienna Mercuri) kidnapping. Katie goes missing on Thursday’s new Y&R episode, January 31, so the tormentor may be making his next power play.

There’s no confirmation on this adversary’s identity or plans, but the move will send a strong message. This person means business, so Victor will listen up and get ready for a fierce fight. He’ll refuse to let any harm come to Katie or his other loved ones. Victor’s all about protecting his family these days, so he’ll really be fired up.

The tormentor will likely communicate with Victor soon after the kidnapping. We can assume this person has no real interest in keeping Katie. She’ll just be a useful pawn. During the week of February 4-8, The Young and the Restless spoilers say Victor will make a stunning discovery. That might involve the video and audio equipment secretly installed at the ranch, but it could also involve a note or email.

An alive J.T. Hellstrom (Thad Luckinbill) still makes the most sense as this terrible enemy. Who else would know every last detail the cover-up crew drama? It’s seemingly someone who was present when J.T. died – or “died” as the case may be. It’s also someone who knows security well enough to repeatedly bypass everything at the Newman ranch.

The tormentor also had access to J.T.’s blood for the planted shirt. Plus, we can’t forget that there’s no body. Until that body turns up, we have to believe J.T. could still be alive. Soap law dictates it! This is the easiest way to wrap up the J.T. story with a nice bow. The girls’ night gang can wiggle out of this if J.T. is still living and breathing.

As a bonus, Y&R fans could see one final showdown. Perhaps that’s what all this is building toward. J.T. may want to finish Victor off since he tried twice already. However, Victor could have a similar goal in mind. He might want to get rid of J.T. once and for all! It might actually be a good twist if Victor later committed the crime he’s currently accused of.

Of course, the charges wouldn’t stick. Prison just can’t contain the great Victor Newman, so he might cover his tracks and put an end to this nightmare. Regardless, The Young and the Restless spoilers say some excellent scenes are in the works. We’ll give you updates as other news comes in. Stick with Y&R and be sure to check CDL often for the latest Young and the Restless spoilers, updates, and news.