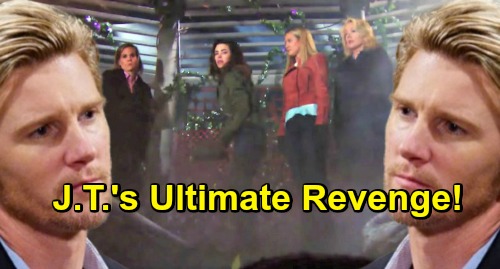 The Young and the Restless (Y&R) spoilers tease that the CBS soap has backed the fab four into a corner. Nikki Newman (Melody Thomas Scott), Victoria Newman (Amelia Heinle), Sharon Newman (Sharon Case) and Phyllis Summers (Gina Tognoni) are stuck in a mess that keeps getting messier. Things are only going to get worse as their alliance falls apart and new clues surface.

There’s probably only one way to help the cover-up wiggle out of murder charges and that’s if J.T. Hellstrom (Thad Luckinbill) isn’t so dead after all! It would actually explain a lot of what we’ve seen so far. J.T.’s body mysteriously vanished from Chancellor Park. His old clothes ended up on Nikki’s bed and they had to be planted by someone who could bypass security – like J.T. the security expert.

The fire at the Newman stables also seemed like a very J.T. thing to do. It resulted in the planted evidence against Victor Newman (Eric Braeden) being found. Remember the bloody shirt that turned up? Who else would’ve had access to J.T.’s blood except J.T. himself? It makes perfect sense for J.T. to make Victor and Nikki his targets after everything that went down.

Of course, they may have just been first on his list. Victoria, Phyllis and Sharon could face some shockers of their own in the coming weeks. The Young and the Restless spoilers say more danger is definitely brewing and there’s a good chance it’ll come straight from J.T. What is all this building to? If J.T. is really alive and out for revenge, just how much is enough?

One thing’s for sure, there’s no way they can do a J.T. survived story without another J.T. sighting. It would be a huge letdown. Besides, J.T. would want to do some tormenting in person. He could have a major faceoff with Victor if “The Moustache” gets cleared of the charges as he’s promised his family.

Then again, Nick may take the lead on this one. After he eventually becomes privy to the girls’ night gang’s disaster, will he be the one to realize J.T. is still out there? Could he take charge to protect four women he cares about? Regardless, something big is looming on The Young and the Restless. Y&R fans might expect the ultimate J.T. bombshell which results in his actual death.

Are you excited about the conclusion of this storyline and J.T.’s potential survival? We’ll give you updates as other Y&R news comes in. Stick with the CBS soap and don’t forget to check CDL often for the latest Young and the Restless spoilers, updates, and news.