BY hellodrdavis on April 28, 2019 | Comments: one comment
Related : Soap Opera, Spoiler, Television, The Young and the Restless 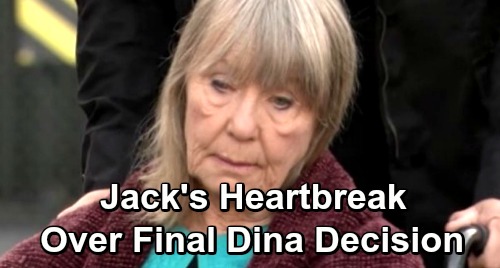 The Young and the Restless spoilers tease that Jack Abbott (Peter Bergman) is headed for heartache and a difficult decision. He has been consumed lately with some tragic and heart-wrenching events. First off, Neil Winters’ (Kristoff St. John) passed away, and Jack had to deal with the loss of his good friend and sponsor. Also, Jack’s been dealing with the threat of Ashley Abbott’s (Eileen Davidson) sabotage and undermining of Jabot. That would be enough to cause anyone serious stress.

But soon, Jack will have another stressful situation to deal with. Dina Mergeron (Marla Adams) has been in declining health for a while now with Alzheimer’s Disease, and things will soon come to a head. The whole family has been dealing with Dina’s memory problems and confusion for many months, and she only seems to be getting worse.

As Jack and other family members have stated, Dina has good days and bad days, but it seems like the bad days are getting worse. She frequently doesn’t recognize any of her family members, and she lashes out at both strangers and her closest family.

When Kerry Johnson (Alice Hunter) was around, Dina initially bombarded her with questions and suspicion about exactly what she was doing in the house and what she wanted. And just recently, Y&R viewers saw Dina lash out at Jack, telling him that his idea for the “Jabot Collective” was terrible and that he was ruining his father’s legacy. It’s getting more and more difficult for the family, and especially Jack, to handle.

According to Y&R spoilers, Jack will soon have a difficult encounter with Dina’s doctor. It appears that, after a checkup, her doctor will suggest to Jack that it is time to start thinking about putting Dina in a long-term care facility. Of course, given Dina’s state of mind most of the time, objectively this seems like a good idea. She could really use the extra level of care.

But of course, for Jack, this will be hard to hear. He’d of course like for Dina to stay in her own home for as long as possible, but he’ll have to consider what the doctor recommends. Plus, given Dina’s level of agitation and frequency of angry outbursts, it’s something he’ll really need to consider.

Look for Jack to wrestle with the decision in the coming days. He might consider hiring more help for Dina around the house in lieu of sending her to a memory care facility, but it looks like the doctor will suggest that a facility is probably best for her. Of course, he’ll need to consult with Traci Abbott (Beth Maitland) and Ashley, and the family will need to reach the decision together.

Do you think Jack should agree to send Dina to a care facility? Could this deterioration foreshadow Dina’s final phase of Alzheimer’s Disease and death? Stay tuned to the CBS soap and don’t forget to check CDL often for the latest Young and the Restless spoilers, updates, and news.