The Young and the Restless Spoilers: Jill Returns, Attempts To Shut Down Cane and Victoria

BY Sean O'Brien on January 1, 2019 | Comments: one comment
Related : Soap Opera, Spoiler, Television, The Young and the Restless 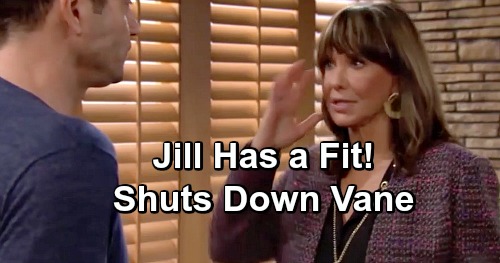 The Young and the Restless spoilers tease that the return of the great Jess Walton (Jill) will add an extra layer of intrigue to the kiss Cane (Daniel Goddard) plants on Victoria’s (Amelia Heinle) lips leading into the new year.

Cane was boozing hard at Devon’s (Bryton James) party on New Year’s Eve. This after Cane recently helped his brother-in-law to deal with lingering grief issues. Cane was later seen kissing Victoria. Yes, that’s quite the calendar crosser for Mr. Ashby, who experienced a very dramatic 2018.

Remarks that Lily’s (Christel Khalil) prison sentence is half over ringed wrong, as she was sent to jail for twelve months in early September. That means Mrs. Ashby has only been incarcerated for three and a half months.

Possibly the scotch Cane was pounding, like those sake bombs two years ago, when he and Juliet (Laur Allen) cavorted, clouded his math skills? Unless an early release for good behavior was being teased for Khalil, who’s now working on a voluntary recurring contract.

Y&R has thankfully written Jill back at the exact time when her stepson needs her. While not always having wise advice heeded, Jill’s directness consistently aims to help her family, sometimes allowing them to realize the truth and act upon it.

As for Vickie, she’s been moving toward Billy (Jason Thompson). Phyllis (Gina Tognoni) has seen the seeming revert and offered a theory. It wasn’t surprising to see Vickie tell Billy’s recent ex- that she’s not considering him romantically, as a push to the future lies ahead. However, a subsequent sequel to ‘Villy’ is always a possibility.

The idea of pairing Vickie with Cane is intriguing because this hasn’t been tried before. Cane has long been loyal to Lily, even during the period when they weren’t married. The Juliet arc was simply an alcohol related issue. Sam resulted from their night in Japan, which is a positive to come from that happenstance.

Vickie is in between men at the moment, as she’s been fully focused on work and the nagging coverup crew matter. So even though she and Cane will initially believe they’re not forming an attraction, it is plausible due to their current circumstances.

Villy revives in early 2019, while Lane remains intact? Maybe Vane forms instead in order to give Goddard’s character a new path until Lily is released, while also allowing Heinle’s alter ego to walk on a fresh road? Both questions can now be asked.