The Young and the Restless Spoilers: Josh Griffith Hints Adam Newman Could Be an Imposter – True Identity Questioned

BY Heather Hughes on April 24, 2019 | Comments: one comment
Related : Soap Opera, Spoiler, Television, The Young and the Restless 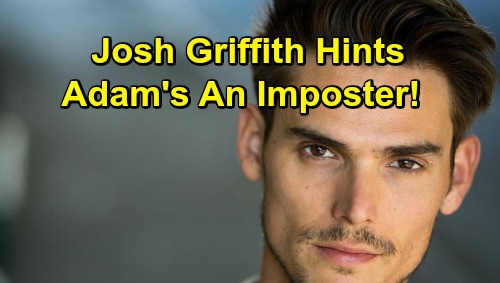 The Young and the Restless (Y&R) spoilers tease that some new clues are surfacing about Adam Newman’s (Mark Grossman) long-awaited return. He was presumed dead in an explosion, so no one in Genoa City ever expected he’d come waltzing back into town. However, that’s exactly what’ll happen when Adam comes on the scene again for May sweeps.

It appears that’s the big secret Victor Newman’s (Eric Braeden) keeping. He must know or at least suspect Adam is alive, but some hot hints suggest this story will be more complicated than it seems. According to the latest issue of Soap Opera Digest, Adam’s comeback will bring some mysteries.

Y&R’s head writer, Josh Griffith, had some cryptic comments about what’s ahead. “Is the real Adam alive? Where has he been? The prodigal son returns home … or does he? When it comes to Adam Newman, one thing you can count on is lots of questions and high-stakes drama for everyone around him,” Griffith said.

Let’s break that down and see if we can read between the lines. Notice Griffith mentioned “the real Adam.” He could’ve just as easily asked, “Is Adam alive?” Why specifically make us wonder if this is the real one? That suggests there may be some imposter suspicions in this Young and the Restless storyline.

Of course, there a couple ways Y&R could take that. If Adam had plastic surgery to fix his face after the explosion, that could bring doubts about his identity. Then again, Adam could look exactly the same – at least to his friends and family in Genoa City. They may not buy it because they were so sure Adam was dead and doppelgangers have been known to surface occasionally.

Nevertheless, doesn’t it seem like Victor would’ve done a DNA test done already? This would be simple to confirm. With that in mind, perhaps it’s Adam who doesn’t believe he’s Adam! Despite any DNA evidence Victor might’ve presented, Adam may have been brainwashed into believing he’s someone else. That would certainly explain the psychiatrist Victor hired.

Then again, maybe Griffith is referring to a total personality transformation. The Young and the Restless spoilers say we may see a far more ruthless version of Adam when he comes home. He could basically be a nasty villain and leave his loved ones wondering what in the world happened to him.

Regardless, there’s a good chance Adam will be proven as the real deal soon enough. Are you anxious to see Adam shock everyone back in GC? We’ll give you updates as other Y&R news comes in. Stay tuned to the CBS soap and don’t forget to check CDL often for the latest Young and the Restless spoilers, updates and news.