BY Sean O'Brien on January 30, 2019 | Comments: one comment
Related : Soap Opera, Spoiler, Television, The Young and the Restless 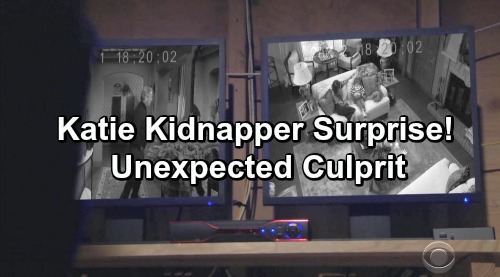 The Young and the Restless spoilers tease that Katie’s (Sienna Mercuri) abduction will come at the hands of whoever is working inside the Newman Ranch. When all clues are considered, it makes most sense to conclude that the kidnapper is a member of Niktor’s staff.

Speculation about J.T. (Thad Luckinbill) being alive is well-founded. However, viewers could also assume that he’s not and still determine who framed Victor (Eric Braeden), tormented Nikki (Melody Thomas Scott), has the Ranch under surveillance, and has taken Katie.

It would be impossible, even in soap land, to believe that an actual human being, rather than the specter of Mr. Hellstrom, could work undetected inside the Ranch for the past handful of weeks. How would this person have gained repeated access to the grounds, carried in and then set up the surveillance system, and done all of the other things that have corralled Niktor and the others to-date?

Consider instead a member of the Ranch staff as the sinister force who is orchestrating these affronts. This person, whoever he, or she is, would have gained awareness of J.T.’s untimely death, possibly as far back as mid-April, when it happened.

A lady who was in love with J.T., but isn’t Mackenzie (Kelly Kruger)? Possibly, a never-spoke-of sibling of the departed Mr. Hellstrom? It’s also possible that someone without a tie to J.T., but a person who’s been harboring a full-out grudge against Nikki, or Victor, is exploiting this particular situation in order to apply vigilante justice.

Whenever this vengeful individual trips up, or is discovered, some type of plausible explanation will need to be offered to Y&R’s discerning audience. It therefore makes most sense to think that a member of the Newman Ranch staff, even if currently cloaked, would have the ability to plant evidence in the stables, set that structure on fire, and place J.T.’s shirt in Niktor’s bed.

Seeing this person’s shadow move across the second floor at the Ranch also means that an ongoing physical presence exists inside Victor and Nikki’s adjusted abode. As savvy fans noticed, the interior of this setting has recently been expanded to include a living room that was never previously shown.

Everything is done for a reason. Re-imagining the Newman living space setting allows for this particular part of the extended arc to play out in a way that serves a current purpose and uses the setting to deliver answers.