The Young and the Restless Spoilers: Kerry’s Dark Side Stuns Jack – Phyllis Betrayal Comes At A Shocking Cost 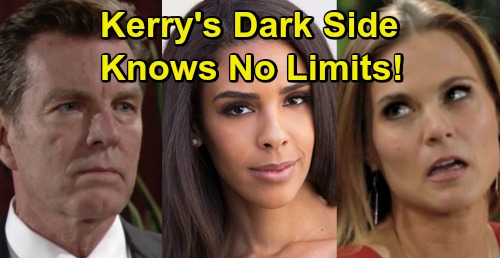 The Young and the Restless (Y&R) spoilers tease that Billy Abbott (Jason Thompson) will be busy with J.T. Hellstrom’s (Thad Luckinbill) takedown. He’ll work hard to get Victoria Newman (Amelia Heinle) back home where she belongs. While Billy teams up with Nick Newman (Joshua Morrow) and Rey Rosales (Jordi Vilasuso), he’ll need Jack Abbott (Peter Bergman) to do him a big favor.

Billy’s holding down the fort as a single dad right now. The parenting is up to him while Victoria’s in her current legal jam. That’s why Billy will need his brother for babysitting duty during the week of March 18-22. He’ll be grateful when Jack agrees to watch Johnny Abbott (Holden and Ryan Hare) and Katie Abbott (Sienna Mercuri) while a J.T. plot is carried out.

Of course, Kerry Johnson (Alice Hunter) is never too far from Jack’s side. She’ll gladly pitch in with the kids and bond with Jack in the process. Unfortunately, Y&R viewers know Kerry’s got a rotten agenda. She’ll just be putting on a show for Jack’s sake, but she just might tip her hand.

The Young and the Restless spoilers say Jack will battle guilt over what he’s asked Kerry to do. He knows Kerry and Phyllis Summers (Gina Tognoni) are friends – at least that’s what Kerry claims. Jack will be sorry for putting Kerry in this difficult position. He’ll wonder if Kerry is truly OK with betraying someone close to her like this.

Jack will be caught off guard when Kerry just brushes it off like it’s nothing. She expressed resistance at first, but that was only so she could lock down a deal. Now Kerry’s all about company loyalty, not loyalty to its leader. She’ll find it far too easy to rationalize deceiving Phyllis. In fact, Jack will be pretty unsettled by how cold and calculating Kerry seems.

The Young and the Restless spoilers say Jack may call Kerry out on that, but she’ll probably justify that as well. Kerry may contend that it’s tough out there in the business world, so you just have to do whatever it takes. Will Jack get suspicious of Kerry after this crucial conversation? Will he take a closer look at who Kerry is and what kind of motives she has?

Jack may become wary of Kerry’s dark side, but he’ll likely keep up the plot to oust Phyllis anyway. What he doesn’t realize is he’s getting played, too! Kerry and her mysterious boss are set to burn some lives down, so stay tuned.

Do you think Kerry is working with Ashley Abbott (Eileen Davidson)? Will they be able to pull off this scheme and gain the upper hand? We’ll give you updates as other Y&R news comes in. Stick with the CBS soap and don’t forget to check CDL often for the latest Young and the Restless spoilers, updates, and news.