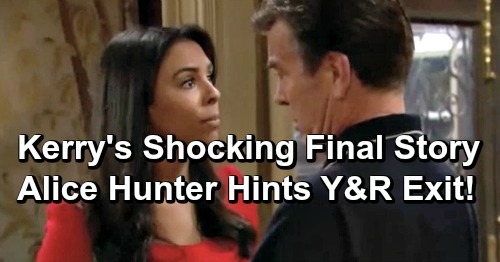 The Young and the Restless (Y&R) spoilers tease that Kerry Johnson (Alice Hunter) will face some serious pressure. Jack Abbott (Peter Bergman) will push Kerry to betray Phyllis Summers (Gina Tognoni), a woman who’s both her boss and her friend. It’s a move that could send their relationship down a terrible path, so expect major drama.

In fact, this could be Kerry’s exit story. We all knew there would be cast cuts thanks to the executive producer and head writer change. That’s especially true since they’re making new hires. Some current characters will have to be sacrificed, so Kerry could be on the chopping block. Some social media hints certainly point in that direction.

For starters, a recent Instagram story featured Hunter thanking her castmates. While it’d be a nice thing to thank the people you work with just because, it seems more likely that there was a reason for it. Perhaps Hunter was wrapping up her Y&R stint and wanted to voice her appreciation before she left.

Next, Hunter posted a photo and seemingly telling message on Twitter. The pic featured Hunter standing in between Peter Bergman and Gina Tognoni, the two costars she’s worked with the most. “My mentors. My friends. This journey has been indescribable,” Hunter gushed. Notice she said “has been.” Hunter didn’t say she was looking forward to the rest of the journey either!

Several Young and the Restless fans were quick to ask if Hunter was leaving, but she didn’t respond. Since Hunter often answers viewer questions, her silence may be the answer. It’s probably not something she can confirm just yet, especially since she previously offered some hints about some story shockers.

When one Y&R watcher wanted a hint, Hunter suggested that “a big reveal is finally coming” and added that it had already been shot. She also promised “some twists and turns soon,” so there may be more to Kerry than meets the eye. Were her claims about freezing her eggs the real story? Is there a darker agenda at work here?

Phyllis has been known to retaliate, so she could easily repay the favor if Kerry turns against her. Kerry’s betrayal could bring some dangerous secrets to the surface. What if Phyllis digs around and exposes Kerry’s true plan? After all, there’s always been something shady about Kerry. She’s been hung up on Jack’s ex-wives and has just been mysterious in general.

Of course, there’s a chance Kerry won’t betray Phyllis. The Young and the Restless spoilers state that Phyllis will try to protect herself this week. Since her part in the trial’s over, maybe that’ll involve handling Kerry and attempting to stay in control of Jabot. Phyllis wouldn’t be above blackmailing an employee and gal pal. If she finds info she can use to her advantage, she won’t hesitate to use it.

Then again, this Phyllis mess could just be the setup to deeper issues for Jack and Kerry. That could spark the big reveal Hunter mentioned and potentially take her character off canvas with a bang! The Young and the Restless spoilers say some excitement’s ahead, so don’t miss all the shakeups.

Do you think Kerry’s on her way out? Will Y&R take her in a sinister direction as they finish off her arc? We’ll give you updates as other news comes in. Stick with the CBS soap and don’t forget to check CDL often for the latest Young and the Restless spoilers, updates and news.

My mentors. My friends. This journey has been indescribable. #YR pic.twitter.com/mZdjLrVYmm