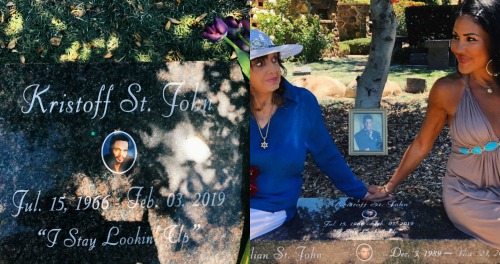 The Young and the Restless spoilers has some news to pass on about a fan-favorite actor who recently passed away. As Y&R fans know, Kristoff St. John, who portrayed Neil Winters on the CBS soap for 25 years, passed away earlier this year. He died on February 4, 2019, at the age of 52.

As CDL previously reported, Kristoff’s ex-wife Mia St. John planned an unveiling ceremony for the bench/headstone that was created for Kristoff’s gravesite. The ceremony took place on July 15, 2019, on what would have been Kristoff’s 53rd birthday.

Mia posted some pictures and a video on her social media feeds about the touching ceremony and shared the bench/headstone with her followers for the first time. She wrote on Twitter: “If you missed the unveiling of @kristoffstjohn1’s headstone, here are photos from the ceremony. His mother and I honored not only the unveiling, but his Birthday, July 15th.”

Mia continued: “Kristoff was buried next to our son @TheArtofJulian. He’ll be missed & loved always…till we meet again.”

As you can see from the photos below, the headstone is a beautiful marble bench structure with photos and tributes of both Kristoff and his son Julian etched on the stone. There appears to be some of Julian’s artwork included on the front of the bench as well.

Mia’s followers have been replying steadily to her posts about the headstone. As many Y&R viewers know, Mia made a special effort to invite the public to the dedication ceremony and to let fans of the late actor know that they were welcome to attend.

One of Mia’s followers responded to her Twitter post by saying: “Beautiful, they will never be forgotten. Rest in peace Julian and Kristoff.” And another said: “God rest these 2 beautiful souls. I’m sure they are together shining down all their love to your family and sending you the strength you need to get through this extremely difficult time.”

Our continued thoughts go out to Mia and Kristoff’s family at this time. Stay tuned to the CBS soap and don’t forget to check CDL often for the latest Young and the Restless spoilers, updates, and news.

If you missed the unveiling of @kristoffstjohn1’s headstone, here are photos from the ceremony. His mother & I honored not only the unveiling, but his Birthday, July 15th ❤️Kristoff was buried next to our son @TheArtofJulian He’ll be missed & loved always… till we meet again 🕊 pic.twitter.com/u86XkYRzmQ

Bittersweet, holding the hand of @kristoffstjohn1’s mother as we unveil the headstone of our beloved sons. The loss is unimaginable, but we will move forward for those still suffering from #mentalillness #Addiction spreading awareness & for our beautiful, pea @TheStJohnFamily🦋 pic.twitter.com/bxlArXknpx