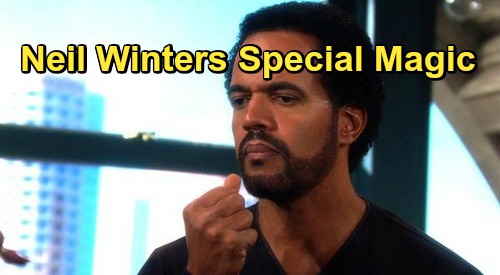 The Young and the Restless spoilers often teased storylines that involved Neil Winters (Kristoff St. John). Today, this digital space honors the 52-year-old actor whose life on this earth has ended while also respecting all who knew and loved him.

St. John suffered the shock of his son Julian’s death in 2014. The effects of that tragic situation were ones that St. John spoke publicly about on various occasions, as he and his ex-wife, Mia St. John pursued justice in that regard.

No one can know truly know how any parent who’s lost a child should deal with such an infinitely sad matter. Speculation about how anyone should handle such situations is ill-advised, as each human being, be they a private individual, or a public figure, faces life as best he, or she can.

St. John will always, rightly, be remembered by Y&R fans for what became his most recognizable role. It’s easy to believe that a great deal of St. John’s heart was projected into his daytime alter ego.

Neil was well-liked by everyone in Genoa City. He was loved by many ladies, most especially Drucilla (Victoria Rowell), as well as by his children, Lily (Christel Khalil) and Devon (Bryton James). Neil also built lasting friendships with many, including Jack Abbott (Peter Bergman).

St. John’s character became a pillar of this Wisconsin community after Neil first debuted in 1991. His resulting love affair with Dru, and mourning of her loss in 2007, remain fully ingrained in all devoted Y&R fan’s thoughts.

Victor (Eric Braeden) took Neil under his wing, enabling the young businessman to earn his way up a tough corporate ladder. Neil’s professional advance eventually led to the formation of the Hamilton-Winters Group, which stands as a legacy to family, which this character honored, promoted, and defended as well as anyone.

The loss of St. John will be deeply felt by all who knew and loved him in his personal life, which certainly includes current and former cast members, along with others who worked with him professionally. His life will also be fully celebrated by his legions of fans.

Y&R will address St. John’s passing and, in time, write a fitting series of memorial episodes that honor Neil. Through GC’s residents, the cast, and all behind-the-scenes crew members TBTB can gift to the audience retrospective scenes that will generate emotion, while also giving St. John’s positive mark on the lives of millions of daytime viewers its full, lasting, and proper due.