The Young and the Restless Spoilers: Kyle and Theo’s Feud Explodes – Abbotts Embrace Dina’s Grandson, Cousin Kyle’s Not Having It 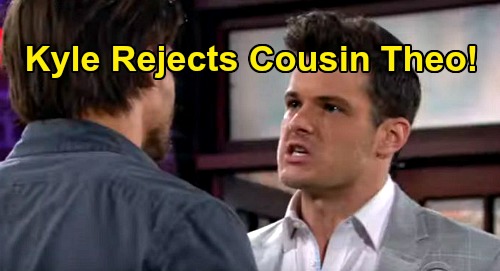 The Young and the Restless (Y&R) spoilers tease that Kyle Abbott (Michael Mealor) has a bombshell in his future. Y&R fans know Theo Vanderway (Tyler Johnson) started a feud with Kyle, but he’s backed down lately. We’d say it’s more like he shifted his strategy, but Theo at least wants Kyle to believe he’s being genuine.

Since Summer Newman (Hunter King) is dating Theo, Kyle knows it’ll be better for everyone if they can try to get along. He’s doing his best to tolerate Theo and perhaps move back in the direction of friendship. Unfortunately, The Young and the Restless spoilers say a massive secret is set to reignite this feud in a big way!

On October 28, Jack Abbott (Peter Bergman) and Traci Abbott (Beth Maitland) find proof that Dina Mergeon (Marla Adams) had Stuart Brooks’ baby. Dina gave her son up for adoption and that son’s name was Eric Vanderway. Obviously, Vanderway isn’t a super common name. Jack knows Theo, so he should know where to start digging. Now that they’ve come this far, it won’t be too tough to unravel the rest of the mystery.

November 7 will bring Jon Briddell’s appearance as Eric Vanderway, who’s presumably Theo’s father. Theo opened up to Summer about being 15 when his dad died. Eric’s appearance may involve a memory of Theo’s. Perhaps he’ll recall Eric talking about his adoptive parents or wishing he knew more about his biological ones.

Of course, it’s no coincidence that Theo is suddenly facing career struggles and having a hard time. The story’s set up for the Abbotts to welcome Theo to their brood with open arms and help him. Jack might have a few reservations at first due to Theo’s history, but this is Dina’s grandson! He won’t be able to ignore another connection to his mother.

Naturally, Kyle will be floored when he gets the news. He may wonder if Theo’s known all along and has targeted him as a result. However, Theo probably would’ve used this shocker to his advantage already if he’d known. When it comes to Theo, it’s always about getting ahead and doing whatever will benefit him in that moment.

Once Theo is in the loop on his Mergeron roots, he can milk them for all they’re worth. Theo has times when he seems capable of authentic emotion, but the truth is he just can’t be trusted. He’s done absolutely nothing to earn any trust at all. To be honest, Theo hasn’t earned a significant family connection either. Y&R’s trying a little too hard to make this character happen – and it’s just not working!

Nevertheless, this is the storyline the writers are going with, so they’re sure to use this as a way to rev up Kyle and Theo’s issues. Theo will likely make Kyle look like the bad guy here. He can stir up trouble and gain Lola Abbott’s (Sasha Calle) sympathy along with the rest of the Abbott clan. It’ll be poor, poor Theo who gets rejected by his bitter cousin, Kyle.