The Young and the Restless Spoilers: Kyle Has Too Much Sympathy for Obsessed, Cruel Summer – Should He Skip Pity and Dump Wife?

BY Heather Hughes on March 27, 2019 | Comments: one comment
Related : Soap Opera, Spoiler, Television, The Young and the Restless 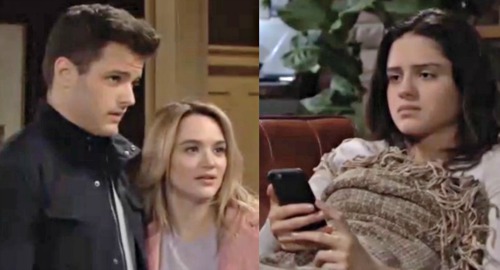 The Young and the Restless (Y&R) spoilers tease that Kyle Abbott (Michael Mealor) will remain in a terrible position. Summer Newman (Hunter King) is to blame for the painful dilemma Kyle’s currently facing. He’s still in love with Lola Rosales (Sasha Calle), but he does care about Summer. Kyle doesn’t want to hurt his new bride, but is his concern for her misplaced?

Lola is also curbing her frustration with Summer and focusing on her donor’s sacrifice. Summer signed up for major surgery and saved Lola’s life, so we’ll give her a little credit for that. However, isn’t that what anyone with a kind heart would do? Devon Hamilton (Bryton James) and Ana Hamilton (Loren Lott) certainly showed up at the hospital to get tested. They were just as ready to go under the knife.

Even strangers flocked to Memorial after Mariah Copeland’s (Camryn Grimes) desperate plea on GC Buzz. There were plenty of people who would’ve gladly taken the risk to help Lola. It was just her dumb luck that manipulative Summer happened to be the only match.

When Summer suspected Kyle was getting cold feet before their wedding, she left him an angry voicemail. Summer let Kyle know that there’d be consequences if he didn’t make it. Let’s not sugarcoat this. Summer was basically saying, “Come marry me or I’ll let the woman you love die.” If Summer would be that petty about it, why should we care if she’s happy now or not? Why should Kyle care?

Of course, we don’t deny that Summer is probably a better match for Kyle on paper. She doesn’t judge him for his flaws like Lola does. Summer also comes from the same rich world, so she has no qualms about any nice gifts Kyle wants to pass along. The things that were nearly deal-breakers for Lola and Kyle are complete non-issues for “Skyle.”

However, none of that matters if Kyle truly loves Lola. The heart wants what it wants. Kyle feels like Lola makes him a better person, and maybe she does. Y&R fans know Summer isn’t going to do Kyle any favors in the morality department.

The Young and the Restless spoilers say Kyle will continue to be torn between Lola and Summer. He’ll worry about hurting Summer’s feelings or making her feel betrayed, so he probably won’t reunite with Lola anytime soon. Kyle will still long for Lola though, which proves Summer doesn’t care about him as much as she says she does. If she did, Summer would want Kyle to be happy.

Maybe Summer will have an epiphany and redeem herself later, but she’s only being cruel right now. Is Kyle wrong to feel sympathy for Summer? Should he worry less about Summer’s heart and more about Lola’s as well as his own? Does Kyle need to seek an annulment and stop this madness?