The Young and the Restless Spoilers: Kyle Must Break Free from Summer Marriage Prison – Get Backbone Back and Fight for Lola 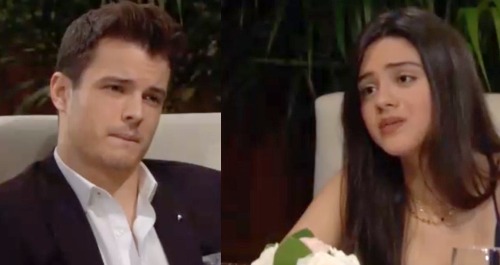 The Young and the Restless (Y&R) spoilers reveal that Kyle Abbott (Michael Mealor) is missing – the real one anyway! Where’s the Kyle who used to fight for what he wanted? Where’s the rebel who would dig up graves and scheme if need be? The appeal of Kyle’s character was always a nice balance between bad boy and total charmer.

Kyle used to be the kind of guy who could sweetly watch Marlon Brando movies with Dina Mergeron (Marla Adams) one day and plot against someone the next. He was the appealing schemer Y&R needed. Unfortunately, Kyle’s not looking much like himself anymore. This whole marriage sham has turned him into someone else entirely.

Of course, we might have to go back a bit further to get to the root of the problem. You could argue that falling for Lola Rosales (Sasha Calle) changed Kyle and turned him into this softie. Love can do that, but perhaps Kyle needs to remember who he used to be. If he can reclaim his old identity, he might be able to break free from his marriage prison.

Summer Abbott (Hunter King) can’t seem to grasp it, but this just isn’t fair to any of them. Has she no dignity? Kyle slept with her and then looked at Lola’s picture after they finished. We can guess which woman Kyle was imagining when they were hitting the sheets!

On Thursday’s Young and the Restless episode, Summer shares some nice moments with Kyle after she shows kindness to Dina. Should Summer really score points for that though? Dina is an elderly woman with Alzheimer’s. Anyone with a soul would want to be gentle with her.

Likewise, Summer should’ve been willing to go through with the liver transplant just to save Lola’s life. The fact that she’s used her liver as leverage shows what kind of person she is. We’re not saying that’s necessarily a bad thing! Soaps need manipulative characters to keep the drama going, and Summer’s as manipulative as it gets.

Nevertheless, Kyle’s backbone has been sacrificed for this storyline. Will he ever grow it back? If Kyle wants Lola, he should go be with her. He seems convinced his true feelings won’t change, so a year with Summer might be a total waste.

Summer played dirty to get what she wanted, so there’s absolutely no reason why Kyle can’t do her dirty now. If Summer keeps pushing, perhaps Kyle will eventually snap out of this pining trance and take charge of his own future! The Young and the Restless spoilers say some exciting action’s ahead, so stay tuned.

Would you like to see Kyle take a stand and put Summer in her place? We’ll give you updates as other Y&R news comes in. Stick with the CBS soap and don’t forget to check CDL often for the latest Young and the Restless spoilers, updates and news.