The Young and the Restless Spoilers: Kyle’s Commitment To Summer Grows – Lola Loses Out On Love 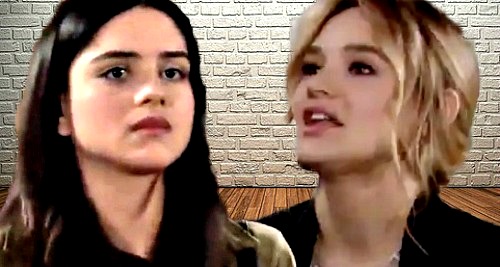 The Young and the Restless spoilers tease that Kyle (Michael Mealor) isn’t planning on leaving Summer (Hunter King) anytime soon. Lola (Sasha Calle) has resigned herself to the reality of Skyle and is choosing to focus on food.

It felt like Y&R was slightly SORAS’ing Lola and Summer’s storylines, didn’t it? The term SORAS is generally used when a character is rapidly aged in order to advance that character’s plot opportunities, along with those of the fictional personalities who are connected to her, or him.

In this case, Lola and Summer are both remarkably recovered from major organ surgery. Would both ladies be up and about just days after one received half of the other’s liver? With all due respect to science’s ego, no.

However, if it is at least a few weeks after one-half of Kola’s and one-half of Skyle’s recoveries, then okay. Still a stretch, even considering that each lady is in her twenties, but acceptable.

Kyle’s tell to Nick (Joshua Morrow), that he does love Summer and didn’t marry her for the fifty percent liver-give to Lola, seemed genuine. The junior Mr. Abbott is resigned to being with Summer and not just because of her fully generous organ gift.

As Y&R fans recall, Lola dumped Kyle. She told him they were finished and that he couldn’t get past Summer. Partially right, Miss Rosales’ relationship inexperience didn’t afford her enough patience, or use of proper strategy tools to win the battle for Kyle’s heart.

Some in GC look down on Lola and Summer as they’ve vied for Kyle’s heart. That contingent may have forgotten what complicated love feels like. Triangles exist in Genoa City and in real life. Human beings have real feelings for each other and sometimes have to compete against another, or others to create, sustain, maintain, or gain a relationship. That’s part of this storyline’s authentic gist.

What also makes sense is that Lola wants to move forward with her life. That’s why Abby’s (Melissa Ordway) query about Lola’s availability wasn’t pushy, as she too has just begun recovering from the end of Abturo. Miss Newman is a new restaurant owner, along with Devon (Bryton James), and needs to have Lola prove that she’s physically able to meet her obligations as head chef.

Calle’s fully endearing character promotes a clear alternative to the brashness of King’s rewritten alter ego. Lola’s success will affirm that anyone can succeed in GC without mouthing constant opinions, or manipulating other’s lives.

As Lola will likely demonstrate, she can overcome a major operation and strive toward a mega-career goal. That mark, when reached, may also enable her to revisit Kola some day, when she and Kyle are both more mature.

As for Summer, her liver will regenerate to full size as the months pass. Hopefully, along with that marvel of humanity, Summer’s conscience will also restore itself to pre-June 2018 status (when King’s character was written back into the show). If that happens, Skyle might last, or even bloom.