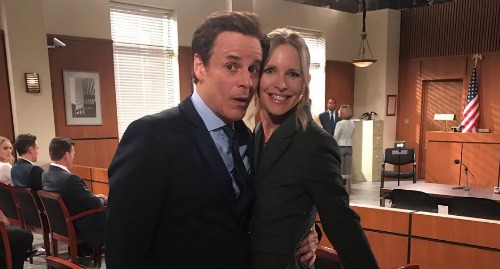 The Young and the Restless spoilers has some exciting news to pass on about a popular Y&R star. Lauralee Bell, who portrays Christine Williams on the CBS soap, is starring and executive producing a new movie on the Lifetime network that will air later this month.

The movie is titled “Nightmare Tenant,” and Lauralee will play a character named Dr. Carol Allen, who is a single mom who takes on a tenant from hell. The movie’s official longline reads: “When a woman rents out her college-bound daughter’s room to a young woman, she doesn’t realize that the girl is her daughter’s vengeful high school rival.”

Lauralee took to Instagram to announce her movie to her followers. She posted the trailer for the movie, which you can watch below, along with the following caption: “Set your DVR today!!! 2 weeks from tonight #nightmaretenant on @lifetimemovies March 22nd 8/7 central #lifetimemovienetwork #mow #yr #virginiatucker.”

Lauralee is in good company in the movie. The tenant will be portrayed by Virginia Tucker, who has also appeared in several TV series, including Sons of Anarchy, Criminal Minds: Beyond Borders, and Miss 2059. Lauralee’s daughter will be portrayed by Heather Hopkins, who has also appeared in True Blood, Criminal Minds, and Grown-ish, among other TV series and movies.

Nightmare Tenant is directed by Rob Malenfant and produced by Ken Sanders. Ken and Lauralee have co-produced together in the past.

Are you excited to see Lauralee in her new movie? Stay tuned to the CBS soap and don’t forget to check CDL often for the latest Young and the Restless spoilers, updates, and news.