The Young and the Restless Spoilers: Lily’s Divorce Bomb Rocks Cane – Another Story Adjustment as Y&R Heads Down New Path 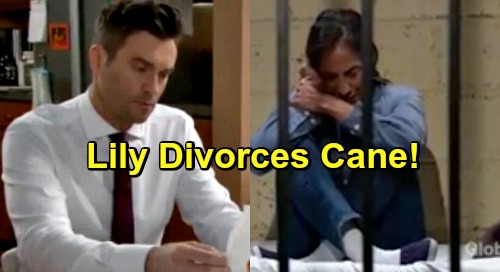 The Young and the Restless (Y&R) spoilers tease that Cane Ashby (Daniel Goddard) has a tough blow headed his way. During the week of March 25-29, Cane will face the harsh truth of a situation. He’ll have to deal with reality, and that reality probably involves the terrible state of his marriage.

Lily Ashby (Christel Khalil) has been suffering behind bars while Cane has been holding down the fort at home. Cane was forced to look after Charlie Ashby (Noah Alexander Gerry), Mattie Ashby (Lexie Stevenson) and little Sam Ashby without Lily by his side. We can understand why Cane would struggle, but he’s been kind of a wimp. Lily’s the one who’s locked up and losing her sense of self in prison.

Cane only had two jobs to do while Lily was in prison: take care of the kids and stay faithful. Charlie got caught drinking and his car was used in Reed Hellstrom’s (Tristan Lake Leabu) hit-and-run accident, so Cane’s had some parenting missteps. Of course, his biggest blunder was kissing Victoria Newman (Amelia Heinle) on more than one occasion.

Cane let himself go into a downward spiral when he should’ve been the strong one. Lily needed him to be her rock on the outside. Unfortunately, Cane couldn’t do that and now he’s probably going to pay the price for it. That brings us back to that harsh truth we mentioned. Will he hear from Lily and get some terrible news?

The Young and the Restless is currently making lots of story adjustments. New head writer Josh Griffith has been tweaking some of former head writer Mal Young’s work. Griffith’s solo work will be airing soon, so this devastating blow to Cane may be one of his first moves.

Will Cane get served with divorce papers? It’d be an easy wrap-up for that story if Khalil still has no interest in returning long-term. Even when Lily eventually gets out of prison, she could live elsewhere and have the kids visit her.

A divorce would allow Cane to either move on or be written out as well. It’s tough to say what Y&R has in mind just yet, but it doesn’t sound good for “Lane.” Will this couple ever reunite or are they doomed? That depends on whether Lily ever returns in the form of a recast or through a Khalil comeback apart from her appearance at the Neil Winter-Kristoff St. John tribute.