BY Sean O'Brien on April 8, 2019 | Comments: one comment
Related : Soap Opera, Spoiler, Television, The Young and the Restless 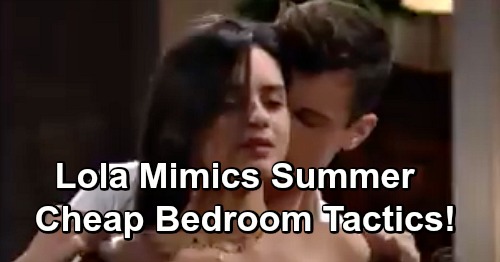 The Young and the Restless spoilers tease that Lola’s (Sasha Calle) strategy shift is dangerous. After deciding to go after Kyle (Michael Mealor), Calle’s once endearing character will begin looking more like 2018’s Summer (Hunter King).

Y&R’s plan in writing King back to regular status was to transform Summer. The soapy mission was accomplished through the formerly likable character’s self-centered statements and actions. Longtime fans saw that the purposeful change was intended to breath new life into an alter ego that apparently was seen as staid.

However, with this fall, or crash, also comes an opportunity for redemption. Fans of King were happy to see that Summer was volunteering to donate half of her liver to Lola. Sure, they knew that she was doing so as part of a plan to box Kyle in. But the physical sacrifice she was making and what it implied regarding her genuine feelings for Kyle, also created momentum.

Lola’s character is somewhat like who Summer used to be. While each lady comes from different backgrounds, their compassion factor (again, referring to who Summer was before the June 2018 transformation) was comparable.

Miss Rosales immediately saw Summer as a threat during the time when Kola first formed. Lola wasn’t able to fight on the same level as her identified rival because of honorable principles that are now, apparently, being discarded. Ah, that’s the rub!

Lola was everything Summer discarded upon her return to GC. Kyle fell in love with Lola’s genuine nature. She was, basically, the anti-Summer, or who Summer used to be.

On the above, ending point, Summer has long recognized that Kyle did have feelings for Lola, but that she represented a rebound. Summer pushed for marriage because she believes Kyle will eventually realize Lola, in her initial form, or even the one that’s developing, represents a secondary version of his original love.

Now, as Lola tries another approach in an effort to reclaim whatever Kola was, Summer can become a sympathetic figure. Starting last June and continuing until Lola’s push of herself, Summer was correctly seen as looking in her own mirror.

One wild card, considering current developments, would be if a baby factors into this picture. Yes, that would alter the triangle’s realities.

Lola’s efforts to basically match Summer’s tactics create a new opportunity. Kyle will, for the first time, be able to see who each person is. Summer’s instinctual wisdom will likely be proven true. Whether that results in Skyle’s union continuing, or Kola being born anew is yet to be seen.