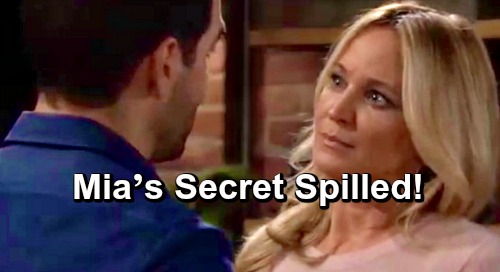 The Young and the Restless (Y&R) spoilers tease that Rey Rosales (Jordi Vilasuso) will let Sharon Newman (Sharon Case) in on a big secret. Perhaps he learned his lesson after keeping Sharon out of the loop on Mia Rosales’ (Noemi Gonzalez) baby for so long. He probably didn’t want to drop any other bombs on Sharon that day, but there’s something else he’ll feel like Sharon needs to know.

During the week of April 15-19, Rey will talk to Sharon about the case he’s been assigned to. Paul Williams (Doug Davidson) is giving Rey a chance to prove himself by stepping up to find his sister’s attacker. Since Paul believes Rey knows more about Lola Rosales’ (Sasha Calle) assault than he’s letting on, he’s stirring the pot a bit and hoping it cooks up some results.

Sharon may wonder why Rey seems so uneasy about all of this. She may get the feeling that Rey doesn’t want Lola’s attacker to wind up in prison. That’s when Rey will admit he already knows who went after Lola. He’ll tell the whole ugly story about Mia targeting Abby Newman (Melissa Ordway) and taking down Lola by mistake.

The Young and the Restless spoilers say Sharon will be appalled by this huge news. It’ll only serve as further proof of Mia’s ruthlessness. Sharon already knew Mia was horrible, but this will show her the woman’s a full-blown monster. She may think Rey needs to have Mia locked up and throw away the key.

However, Rey will remind Sharon that Mia is pregnant. Whether her baby belongs to Rey or Arturo Rosales (Jason Canela), this kid is still part of the family. Rey will be hesitant to throw Mia behind bars when there’s so much at stake. He won’t to do anything that might jeopardize Mia’s health for the baby’s sake.

Even so, Sharon may be a little hurt that Rey covered for Mia and not her! Rey arrested Sharon on the spot after her confession about the night J.T. Hellstrom (Thad Luckinbill) “died.” Why couldn’t Rey skirt the law then, too?

Nevertheless, Sharon has forgiven Rey for all that. They’ve moved on, so this will just be about honesty and open communication between them. Y&R fans can expect Rey to spill the beans and ask Sharon for a difficult favor. He’ll want her to keep her mouth shut about Mia’s role in the attack and protect this baby.

Sharon may not be particularly interested in participating in a cover-up. After all, her last one got her in loads of trouble! Still, Sharon loves Rey and will likely promise to stay quiet. Since we know Sharon isn’t the greatest at keeping secrets, it’ll be interesting to see how long that plan lasts.