The Young and the Restless Spoilers: Michelle Stafford’s Phyllis Reunites with Nick, Hot Chemistry Revived – Classic Phick Back On? 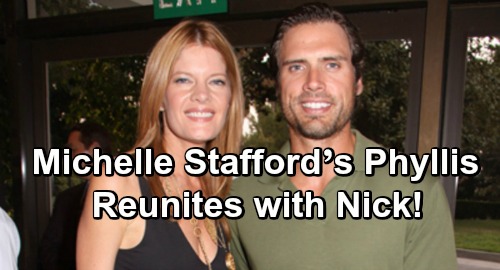 The Young and the Restless (Y&R) spoilers tease that a big reunion may be on the way. Not too long ago, Y&R fans know Nick Newman (Joshua Morrow) kicked Phyllis Summers (Gina Tognoni) out of his house and out of his life. He was disgusted over her immunity deal and how she took down the other cover-up crew members to protect herself.

Many Young and the Restless viewers were glad to see this version of “Phick” come to an end. However, some recent casting news could be a positive sign for Nick and Phyllis’ romantic future. Michelle Stafford is reclaiming the role, so Y&R may plan to pair Phyllis back up with Nick down the road. There are definitely come clues that might point to that reunion.

For starters, we know that Joshua Morrow considered leaving the show until Y&R gave him a new direction. Morrow wanted something besides your average dad, so The Young and the Restless cooperated by making him edgier and giving him Dark Horse. Nick even got two brand-new sets – his fancy-schmancy office and that mansion he built without Sharon Newman’s (Sharon Case) knowledge.

This seems like a clear effort to keep Morrow happy and around. There was even buzz that Morrow had no interest in a long-term Sharon and Nick reunion, which may have been why “Phick” happened again. Unfortunately, that didn’t go over well with Y&R fans, so Stafford’s rehiring may be a good solution – at least in terms of finding Nick a romance that works.

On Twitter, plenty of viewers were excited about the possibility of the previous “Phick’s” revival. One fan said, “I enjoyed the original #Phick…and I for one can’t wait to see if MS & JM are still…” and added fire emojis. Another fan agreed that Morrow and Stafford “have hot chemistry.” One more exclaimed, “Can’t wait to have the OGs back on my screen! YESSSSSS!!!”

There’s obviously some support for Stafford’s Phyllis with Nick, so we want to know what you think. This un-recasting news likely seals the deal on Nick and Phyllis getting back together, but how do you feel about that? Do you like Nick and classic Phyllis as a couple?