The Young and the Restless Spoilers: Mishael Morgan Returns To Y&R For More Hot Hilary Episodes

BY Joanna Mazewski on May 2, 2019 | Comments: 3 comments
Related : Soap Opera, Spoiler, Television, The Young and the Restless 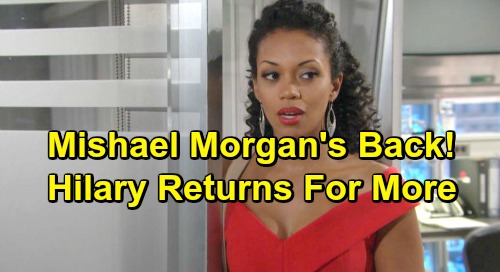 The Young and the Restless spoilers has some news to pass on about a popular Y&R star. Mishael Morgan will in fact return and appear in several more upcoming new Y&R episodes as Hilary Curtis according to SID – most likely in Devon’s dreams or memories. Mishael recently spoke about her tenure at Y&R to Soap Hub and she was asked about whether she’d ever go back to Y&R in a more permanent capacity.

It’s a notion that may have Y&R fans scratching their heads, since Hilary passed away on the show in 2018. And it wasn’t a soapy death where the character was presumed dead and/or the body was never found. Rather, Hilary died in Devon Hamilton’s (Bryton James) arms of internal injuries, in arguably one of the saddest deaths in recent soap history.

So, what did Mishael have to say about a possible Y&R return? When asked if she’d ever come back to the show, Mishael said, “I don’t know. As of right now, I feel really happy about moving forward and trying something new in my career, playing somebody new. When I decided to become an actor, it was because I wanted to be different people.”

She continued: “Y&R gave me that opportunity. Now, I’m excited to go out there and spread my wings. I’m a different person and actor than when I started. I’m going to shoot for the stars and just try [to get new roles].”

But a bit later she added, “I think if I ever wanted to go back maybe they’d find a way to sneak Hilary back in [even though she died on-screen] or maybe someone who looks just like her. I respect the art form. I’ll never say no [to daytime]. I appreciate Y&R and I’m grateful for it.”

Of course, Y&R fans know that Mishael already did make a brief comeback. She appeared as herself on the special tribute episode for Kristoff St. John earlier this week, and Hilary appeared briefly in a vision that Devon had when he observed his new love interest Elena Dawson (Brytni Sarpy) laughing over dinner.

There are no doubt many fans who would welcome the opportunity to see Hilary back on their screens since she was one of the most dynamic soap characters out there! Would you like to see Mishael return to Y&R on a more permanent basis? Stay tuned to the CBS soap and don’t forget to check CDL often for the latest Young and the Restless spoilers, updates, and news.