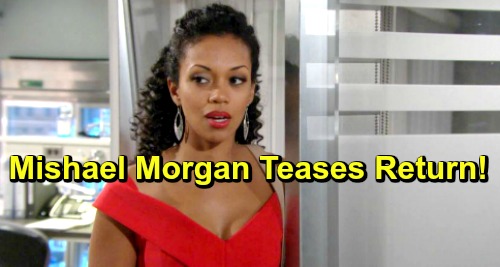 The Young and the Restless (Y&R) spoilers tease that Hilary Curtis (Mishael Morgan) may be making her way back to Genoa City for an unexpected return. It sounds ridiculous as Hilary died on screen, but it looks like there is a possibility that Mishael may return to Y&R as a Hilary lookalike.

In a recent interview Mishael said that she respected the daytime art-form and would consider a return as someone who looked just like Hilary. And, it’s a guarantee if that does happen, Devon Hamilton (Bryton James) will be pretty spooked by her resemblance to his deceased wife. Imagine his reaction seeing Hilary’s doppelganger!

While it’s evident that Y&R isn’t considering bringing Hilary from the dead, they may want to use Morgan as a completely new character. If they did, Devon would feel an immediate connection to her, while she wouldn’t know him at all.

The Young and the Restless spoilers state that Devon has decided to move on with Elena Dawson (Brytni Sarpy). It has taken him a long time to move on from Hilary’s sudden death.

He couldn’t understand why she and their unborn child was taken from him so soon. As a result and the way she died, Devon was angry with his sister Lily Winters (Christel Khalil) for taking them from him.

Since Devon decided to move on and not sulk about his wife’s death, he’s felt better. His anxiety levels have decreased and he’s entertaining the thought of dating Elena. Of course, he’s taking it slow, but so far, he really likes her and his romantic future looks bright.

The Young and the Restless spoilers reveal that during the week of May 6, Elena and Devon will grow closer and they will share their first steamy kiss. It will be very confusing for Devon as he has feelings for Elena, but he is still very much in love with his beloved Hilary.

Imagine his surprise when he spots someone in town that looks exactly like Hilary. He will be taken aback as he looks at her again. Of course, he will try to talk to her and get to know her.

This could be trouble for Elena’s new relationship with Devon. And, how will Devon react to the woman who could be Hilary’s identical twin? Don’t forget to come back to CDL later for more The Young and the Restless (Y&R) spoilers, news, and casting updates!