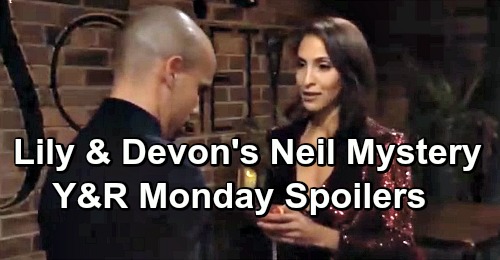 The Young and the Restless (Y&R) spoilers for Monday, April 22, tease that Abby Newman (Melissa Ordway) will feel like a failure. At the end of Friday’s episode, Abby declares her new restaurant officially open for business. Alas, people aren’t exactly beating the door down to get in. Abby’s stunned and distraught when not a soul’s waiting to come dine at Society.

Fortunately, it won’t be long until the place is hopping. Abby supposedly has a large social media following, so maybe she could use that to her advantage. Whatever the case, Y&R spoilers say there’ll be plenty of guests to serve soon. Some of them will be quite familiar – like Lily Ashby (Christel Khalil) and Cane Ashby (Daniel Goddard).

Abby will undoubtedly greet Lily and gush over her homecoming. She’ll be glad Lily could make it out to her big night with Cane. Unfortunately, we’ll see some tension between Cane and Lily. They won’t want to take any attention away from Abby’s success, but their imploding marriage will definitely be on their minds. Cane will just wish there was some way to turn back the clock and undo his mistakes.

Sadly, Lily’s world will get turned upside down even more soon enough. We know the news of Neil Winters’ (Kristoff St. John) death will strike on Tuesday, April 23, so Monday will bring the setup for that. Devon Hamilton (Bryton James) will be baffled by Neil’s absence at the opening, but Lily will try to explain it away. They won’t realize that Neil’s sudden demise is the reason he couldn’t make it.

Other Young and the Restless spoilers say Mariah Copeland (Camryn Grimes) will also be on hand for the celebration. Of course, she’ll still be focused on the threat she’s facing. Mariah’s trying to pretend everything’s fine, but Tessa Porter (Cait Fairbanks) knows her better than that. Tessa will be working for most of the evening, but she’ll likely squeeze in a moment or two of comfort for Mariah.

Ashley Abbott (Eileen Davidson) will make another Genoa City comeback as well. She’ll seem quite confident during her upcoming chat with Jack Abbott (Peter Bergman). These two are involved in a heated corporate battle, but Ashley will believe she’s still got the upper hand. Jack will find evidence of some Jabot trickery, so Ash may be right about that – at least for now.

The Young and the Restless spoilers say Jack will fight back eventually, but the rest of this week will be all about remembering Neil and coping with this horrible loss. We’ll give you updates as other Y&R details emerge. Stay tuned to the CBS soap and don’t forget to check CDL often for the latest Young and the Restless spoilers, updates, and news.